How to make a end portal in minecraft

In Minecraft there are multiple worlds to move in the required portals. The so-called edge is the final part of the game, where you must find and kill the main boss – Dragon. To get the edge you need to make the end portal in Minecraft. 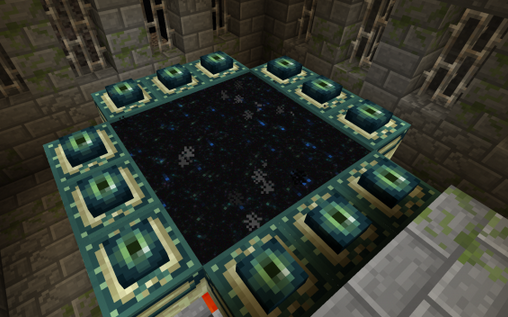 Related articles:
Instruction
1
To make a portal to the end in Minecraft, you need to go to hell and find the dungeon. Kill a dozen small blaze and take away their fire sticks.
2
In a normal world subtract 15 pearls of undermenu. These creatures are black, high and can teleport.
3
Divide fire rods 2 powder, combine one of them with pearl the enderman. Thanks to these simple manipulations, you will get the eyes of the enderman. You will need about 15 pieces.
4
To make a portal to the end in Minecraft, but rather to find it necessary to throw in the air the eyes of the enderman and watch where he flies. Go for it and throw the eye again. After several attempts it will burn. if you find that the eye region will fly down to the water or to the ground, then the portal to the end is near. It can be on the ground and under water. Raise the eyes of the enderman and dig until you see a cave.
5
Carefully inspect the cave. It is possible to find grills, doors, buttons that are useful for decorating the house. Only in the cave you can get mossy cobblestone.
6
Find the portal region in Minecraft in the cave in a small room with lava and spawners. Spawner can kill or cover up the torches, and lava to impose, so as not to fall on her. In the room you will see stairs that lead to the portal, but it will not be active.
7
Extend the portal end with the eyes of the enderman, putting them on blocks of the portal. The result of these manipulations the portal to the end in Minecraft has to be activated.
Note
Before starting construction of the portal in the region in Minecraft, it is all very well to think about. Journey into the world of the end will be very difficult. Live here Wanderers and the dragon, there is no dynamic light. Dig down in the world and can not be, otherwise you can fall into the abyss and die.
Useful advice
Don't forget where you made the portal to the end in Minecraft, as the probability of being killed in the world of anderov very large. Be prepared to do battle with the big boss, kill it will be hard enough.
Is the advice useful?
See also
Присоединяйтесь к нам
New advices