What is commemoration at the offertory

In the Orthodox churches there are several types of remembrance in prayer of the people. For example, the order on health on Liturgy or a prayer service, a Requiem notes on the memorial service. Commemoration at the offertory - as one of variants remembrance of the Church, which is in great demand among believers. 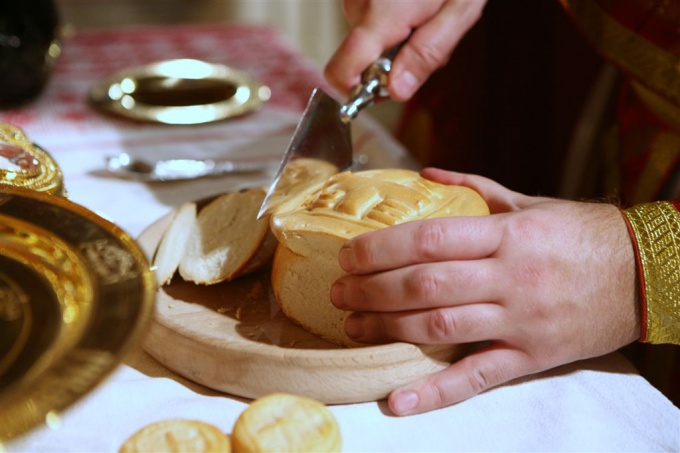 The Liturgy of preparation is a preparation of the substance for the sacrament of the Holy Eucharist. About 15 - 20 minutes before the Liturgy the priest at the altar performs a certain service, which prepares the bread and wine for future applications of the latter in the Body and Blood of Jesus Christ.

The rite of the offertory consists of several parts. First, a big particle is removed from the main communion bread. This so-called lamb. That is the bread and is attached to the Body of Christ. Then sasunik takes out other small particles of prosphora in memory of the mother of God, angels, John the Baptist and other saints. Then the priest takes particles to commemorate living people. During this read notes with names of people who ordered on health. Further commemorated the dead. It also is a commemoration at the offertory. For each name removed separate small particle, which is placed on the DISKOS next to the large-sized particles (lamb of particles in memory of the Mother of God). Also, during the offertory in the Holy Cup (chalice) pours the wine which is then attached to the blood of Jesus Christ.

Primechatelno feature of the commemoration at the offertory is that at the end of the Liturgy, when it was committed, the sacrament of the Eucharist and the people partook of the Body and Blood of Christ, particles, is removed in memory of ominasis, down to the Holy Cup with the Blood of Christ. The priest utters the words that the Lord has washed with his own blood the sins of all here polinevrita.

Religious people see the commemoration at the offertory one of the most powerful prayers for your family and friends.