How to dissolve a kidney stone

With optimal metabolism of the kidney regularly derive its byproducts in the urine. But if the metabolism is disturbed, their concentration increases, the salt precipitates and accumulates to develop kidney disease. Slowly the individual crystals grow stones of various structure and size. Some types of stones can be dissolved. Becoming smaller, they go out by yourself. 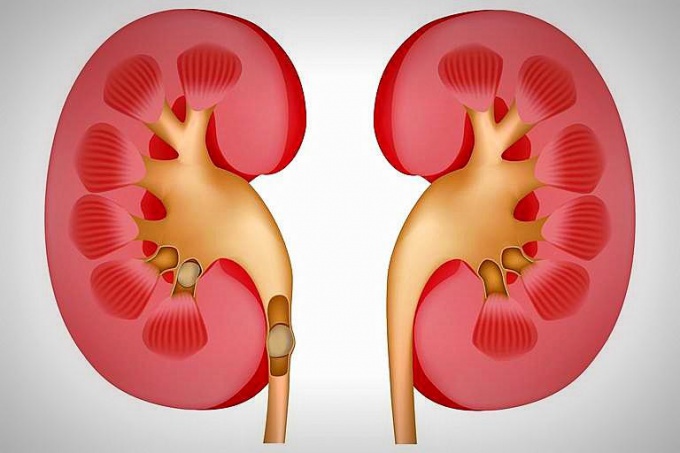 Related articles:
Instruction
1
Crucial chemical composition of the stones. Unfortunately, the most common education – oxalate – so strong that they are almost impossible to influence by drugs. They were either crushed or removed surgically. Dissolution can only urate, phosphate and cystine stones.
2
Of urate of sodium and potassium are formed smooth, yellow-orange education – loss. And although they are quite solid, however, dissolve very easily. Therapeutic effect ensure an alkaline reaction of urine, the diet excludes the consumption of acidic foods and diuretics.
3
Crystals of calcium phosphate are growing rapidly soft white phosphate stones. Because they are often formed in the urine increased alkaline reaction, the treatment is, on the contrary, in its acidification. The diet includes acidic fruits, juices, fruit drinks, rosehip infusion tea, hibiscus tea, and phosphates dissolve fast enough.
4
From the amino acids cestino formed round, smooth, soft, like wax, cystine stones. But they are very rare, since such education is the consequence of genetic anomalies in which the kidneys produce an excess of these amino acids. The drugs that prevent their generation, – "Tiopronin", "Penicillin", "Captopril".
5
There are many drugs based on plant extracts that dissolve the stones, and to treat inflammation of the kidneys, urinary system. Such, for example, Polish "Vitalizing". It is a diuretic paste, which is diluted with water and drink. Especially well it washes out the pebbles.
6
"Allopurinol" dissolve urate in the kidneys and in the joints, so they are treated gout. This drug is also better to cope with small entities. "Allopurinol" is valuable because it can be prescribed when the cause of crystallization cannot be found.
7
Omelicheva urine, well dissolve urate German effervescent tablets "Blemaren". They can try to treat and mixed urate-oxalate stones, and even a small oxalate. "Blemaren" also prevents the formation of calcium-oxalate crystals. Similar to the Russian "Ksidifon".
8
To dissolve phosphate stones used "Urolesan". Furthermore, it acts as an antiseptic, diuretic, relieves spasms, and simultaneously eliminates stagnation of bile and improves blood circulation in the liver. The same action – medication Tsiston, only it should take longer.
9
Stones of various sizes and shapes dissolve "Pitalito". It is used for acute pain caused by renal colic. It is also necessary if shock-wave lithotripsy caused a complication as you move through the urinary tract of their pieces.
10
Effective as drugs "Kanefron N", "Rowatinex". But the most popular "Shed" and its variants "Super capsules Shed", "Shed Of". They are made from the extract of shelkovchanka curly (or keiblinger), which perfectly dissolves stones of different composition; it has strong diuretic properties; relieves spasms and inflammation. While the drug is normalizes calcium and urate metabolism, preventing their crystallization.
Note
It is very risky to try to dissolve the stones without medical supervision. They can come in motion and block the ureter. Treatment lemon juice often leads to stomach ulcers. It is better to trust a specialist.

Sometimes wrongly diagnosed: "kidney stones". But on the monitor of the ultrasound machine "grit" may seem small vessels, dense tissue or papillae of the kidneys. If you were told that you have "sand", take the time to drink diuretics. It makes sense to do an ultrasound again in another medical facility.
Useful advice
There is unreasonably excessive demand for imported drug "Keibler extra". But it is the same as our "Shed". Moreover, the composition of domestic drug, in addition to shelkovchanka curly (that is, keiblinger), includes a number of ingredients that make it even more effective. Indonesian BAD is also twice as expensive, and in pharmacies it is usually not found.
Is the advice useful?
See also
Подписывайтесь на наш канал