For gasoline engines of VAZ 2109 is set the same the timing mechanism and injection. Small differences exist only in the pulleys of a drive of the generator. 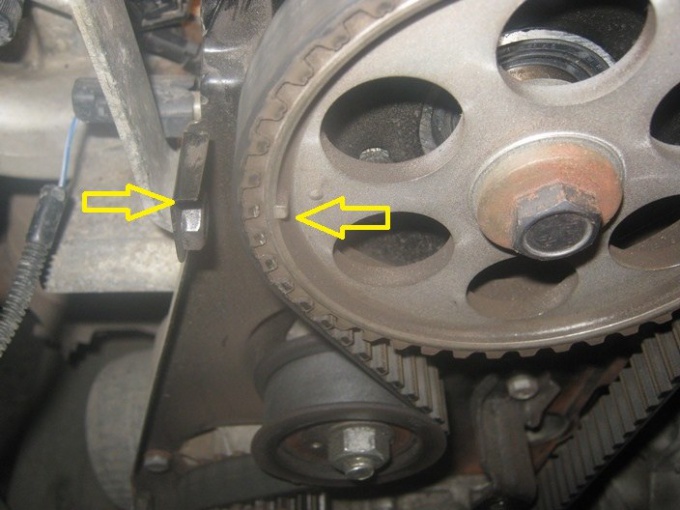 Related articles:
No matter which engine is installed on the VAZ 2109, the composition of the timing mechanism remains the same. However, there is a difference in the pulleys of a drive of the generator. In the injection engine has a wide multi-strap, and wedge-shaped carburetor. But these details are not relevant to the timing, as functions naturally have no effect. The pulley has teeth that required for the engine speed sender. To remove the belt and wear it correctly, you only need to follow a certain sequence of actions.

So first open the hood and disconnect the negative terminal from the battery. In the process, will have to move the generator, you can accidentally hurt his insights and close to ground. After raising the right side of the car on a Jack and remove the wheel. Without removing the wheels will not work to remove the timing belt. On the right side remove the protection, it is fastened with screws to the body. Just put the crankshaft on the label that is on the flywheel. You can see it by removing the rubber cover on the clutch unit.

Now loosen the nut fixing the generator and pull it closer to the engine to make it easier to remove the alternator belt. When loosened it can be removed and see if it cracks and damage. If any, it is best to replace it. No matter multi-strap you have, or wedge-shaped. And now the hardest part – removing the pulley from the crankshaft.

On gasoline engines installed pulleys that have a long window. They can put a chisel or a wrench to Balk in the engine block. A socket wrench 19 to loosen the bolt. But the injection is more difficult, since there are no such Windows. Will have to remove the rubber cover on the clutch unit. In the observation window to set the chisel or large flat screwdriver rest it in the teeth of the crown.

When I removed the pulley, you can begin to removing the belt. To do this, loosen the tension pulley, remove the belt from the pulley on the camshaft, and then at the crank. All, now that you got rid of it, you are ready to install. Try to change the pump, pulley and timing belt together.

For starters, you need to set crankshaft and camshafts on labels. As already mentioned, the crankshaft is placed at the mark on the flywheel. After removing the cover, you will see a metal bar with a cutout. This cut must coincide with the line on the flywheel housing.

After embarking on a camshaft. On the engine compartment side, is a plank. But on the pulley there is a mark, which must clearly coincide with that strap on the engine. At the same time evaluate the condition of the pulleys, if they develop. If there is excessive wear, you need to replace them.

Take the new roller installed and najavljen nut. Now put a new belt. First, on the crankshaft pulley, and then, by slightly pulling on the crankshaft pulley. Also wear on the pump and the roller. When I put the belt, a special key we stretch it with a roller. The optimal stretch is when the right part of the belt with little effort rotated 90 degrees. The belt is tensioned, the replacement is over.
Is the advice useful?
See also
Присоединяйтесь к нам
New advices