How to change the timing belt for VAZ 2110

VAZ 2110 went off the Assembly line with 16-valve and 8-valve engines. The first is more powerful, faster, but quite expensive to maintain. Yes, and replace the timing belt on them is a little harder than on the 8 valve as the engine two camshafts. 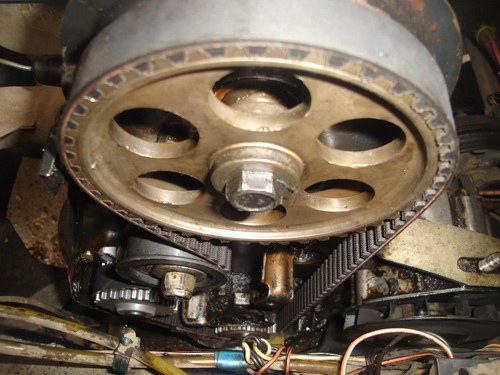 Related articles:
For VAZ 2110 engines are installed with a different capacity and with different types of distribution systems. The most simple instances is a vosmiklapanny engine having per cylinder two valves (intake and exhaust). But the 16-valve, more powerful, has 4 valves per cylinder. Of course, there are two camshafts, so the engine design does not allow for the drive from one. It follows that the crankshaft must rotate two shafts instead of one. And the timing belt needs to be longer.

The procedure takes a small period of time, unless you know what you are doing. You need to know a little, the main thing – how to put markers on trees. Remove the first cover, which is covered by the timing belt, then loosen and remove the alternator belt. After you raise your right side of the machine, remove the wheel and protect him.

Now, when you removed the alternator belt and have access to the crankshaft pulley, you must put the shafts on labels. Rotate the crankshaft clockwise, align the marks you need:

• on the flywheel, it is made in the form of a line;
• on the camshaft with the strap installed on the engine.

With a screwdriver hold the flywheel from turning, remove the bolt of fastening of a pulley of the generator. Be careful not to damage the teeth, which are necessary for the operation of the engine speed sender. This applies to fuel injected motors. Otherwise, the ECU will generate an error.

Loosen tensioner pulley and remove it. Underneath is the adjusting washer, don't lose her. Now you can easily remove the belt and install the new. Put the roller, nivlem (do not tighten) the nut. Throws the belt on the crankshaft pulley, with a little stretch install it on the camshaft pulley. Put through the roller and the pump, we tighten the roller. Check the label matching before installing the belt.

Install the belt on the 16-valve engine

Here is a little more complicated, but still can be replaced pretty quickly. First remove the protective cover that attaches to the engine with six bolts. Then raise the machine on a Jack and remove the wheel with protection. Put the car in neutral and the rear wheel set stops. With a screwdriver hold the crankshaft over the teeth of the crown. So it is better to break the bolt on the pulley. If you substitute an emphasis under the teeth on the pulley, it is possible to damage them. Eventually the ECU will work correctly.

The removal procedure is the same as in the case of the 8-valve engine. Just keep in mind that 16-valve, not one, but two videos. Stretch (with two holes for special wrench) installed from the side of the cabin. A reference from the generator should be placed, there are no holes spetsklyuch. Don't be lazy, check whether the labels on the shafts before putting the new belt. This will allow you to do everything efficiently, and the next 50-60 thousand miles you will not know the problems with the timing mechanism.
Is the advice useful?
See also
Подписывайтесь на наш канал