How to hide the foodie in Skyrim

The dark brotherhood, a powerful organization of murders in Tamriel, prepares in the province of Skyrim the most notorious and dangerous crime in its history – the murder of the Emperor. The events begin to develop after the player enters this fraction. Preparation for murder very careful, the last step is the elimination of the famous chefs-Orc Foodie who cooks for the Emperor. 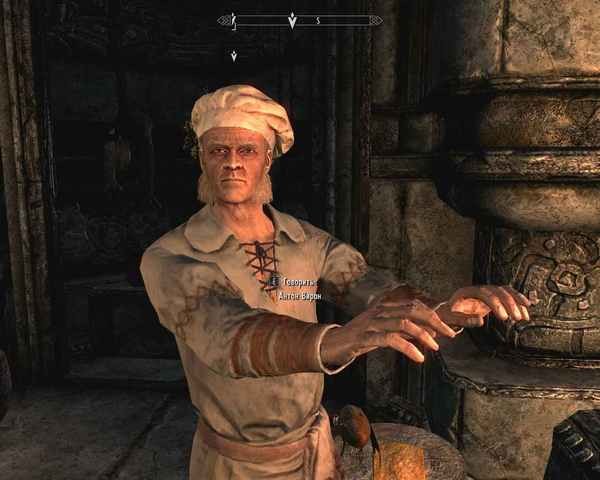 The dark Brotherhood with a new member of the player-draconomicon – completed all the stages of preparation for a daring murder, are only the last steps: you need to access the Imperial kitchen, to poison him. But without special certificates chefs make it impossible, random people close to the ruler are not allowed. The dark Brotherhood know that to prepare the dishes to the Imperial table in Skyrim invited famous chef, the Foodie, the author of a cookbook. If pretending to be a Foodie and get his diploma, you can easily get to the kitchen.

The only problem is that the identity of the famous Gourmet Dark Brotherhood, and the player gets the task to find the cook, kill him, take the letter and hide the body so no one before has not discovered the substitution. About Foodie can only know one character – his friend Anton Veeran, the chef of the Palace Markarth. If it is okay to intimidate, he will give a great cook – he is the ork Balagah Gros-Noob from the tavern "Night gate" on the South-West of Skyrim, near the lake Torgrim. He lives in the basement of a tavern, in a small room accessed from the entrance behind the bar.

How to hide the body of the Gourmet?

To kill a Foodie for an experienced member of the Dark Brotherhood – no problem, you can use any weapons and any technique. But the question arises, what to do with the body – if somebody finds a dead Imperial chefs to complete the task will be impossible. There are several ways to hide the body. If you commit a murder in the basement, you can use a large barrel – she's standing right next to the bed.

You can hide it behind the wine barrels, which are in the basement. If you have caught the Foodie on the tavern, hide his body under stacks of hay nearby. Sometimes an Orc is walking around the lake, in this case, it can simply throw into the water. The most agile killers wait until the cook out at the pier, and, hidden, accurate shot from a bow kill him, the body in this case falls into the lake. Just have to pick up his diploma, and the job can be considered done.

To move the body (like any other object in the game Skyrim), you have to hold down E, if you are the default settings. Otherwise, click the other actions button, which you have installed, or look in the settings control which key is used to move things.
Is the advice useful?
See also
Подписывайтесь на наш канал