What martial art is best

Due to the fact that every martial art has certain characteristics and their fans, it is impossible to distinguish any of the best of them. You can choose the most suitable technique in accordance with the objectives, and given the level of your physical capabilities and temperament. 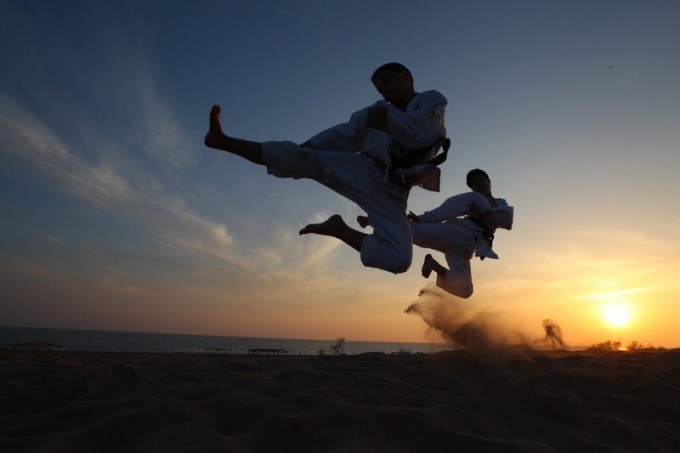 Martial arts are called systems of martial arts and self-defense. There are different classifications of martial arts, depending on what is taken as a basis. For example, they can be classified according to the place of occurrence, a striking example of this are the Eastern martial arts.

The other option of classification – relative to the weapon. Some of the combat system is actively used by different types of edged weapons, as example, karate, Wushu and many other martial arts. Others avoid it – for example, Aikido. However, protection from edged weapons are taught in almost any martial art.

Within martial arts there is a distinction between trends and styles, types and schools. In addition, in martial arts there is often a division into internal and external styles. External very aggressive, dynamic, effects. In the interior the emphasis is on working with the mind, the mastery of internal energy. For example, to the inside of the school include Taijiquan, external hard system – Qigong "Iron shirt". It should be noted that in the battle plan of the internal styles, while the appearance of softness and lack of, in no way inferior external.

Martial arts can also be divided into power and soft. The first is the Sambo, karate Kyokushinkai, etc., to the second - Aikido, Wushu styles of tai Chi Chuan, Bagua Zhang and some others.

You can classify the combat system in the Arsenal of the techniques employed. In some predominate blows (karate, Wushu), in other marches (Sambo, Aikido), others use the entire Arsenal – JIU-jitsu, combat Sambo, army hand to hand combat, and many others.

The most common types of martial arts

One of the most effective martial arts, commonly used in Russia – Sambo. This kind of struggle was created for private use in the power structures, to reflect attacks as unarmed and armed opponent. In Sambo includes many techniques from various martial arts of different eras and peoples. In this technique used the most simple and effective techniques.

Another common martial art is Boxing. In this kind of sports is important a well-placed kick or combination of punches that leave almost no chance for a weak opponent. Only should take into account that Boxing, like other martial arts, requires very serious training.

Among the martial arts leading in popularity positions of Kyokushinkai karate. This pin style includes a variety of percussion technique, as well as all sorts of lock, effectively preventing the enemy's attack. Also practiced Kyokushinkai breaking various items. To do this, the shock of the hands and feet through all kinds of packings are prepared in a long time. Karate classes not only train the body, they harden and fighting spirit. The founder of Kyokushinkai karate by the famous master Mas Oyama – combined in this style the most effective combat techniques.

As for the effectiveness of Aikido, a martial art justifies itself in the real battle only after a long training. One of the effective options of Aikido demonstrates in his films, the famous actor Steven Seagal, his style is quite hard, it has a striking.

Many fans of martial arts attracts Wushu, a major role in promoting it played the cinema - movies with Bruce Lee or Jackie Chan, few people could be indifferent. Among the domestic systems, in addition to Sambo, it is worth mentioning Russian style of unarmed combat. It's not the most spectacular, but very effective combat system, developed by Alexios Kadochnikova. It all built to defeat the enemy with minimal effort.

What combat system should I choose? A lot depends on your interests and physical capabilities. If you are strong and tall, you may consider hard martial arts, for example, Kyokushinkai karate, Boxing and Sambo. In that case, if you do not possess high physical capabilities, choose a martial art in which the emphasis is not on strength but on dexterity and honed technique. It may be JIU-jitsu, Russian style, Aikido, internal styles of Wushu.

Finally it is possible to recall the old truth – when choosing a martial art, a person often chooses the path.
Is the advice useful?
See also
Присоединяйтесь к нам
New advices