How to defeat the enemy in the fight

The hero of brad pitt from the movie Fight club said, "You don't know anything about yourself if you never fought". How is the truth, you should not judge. Another thing is that a street fight can not only trap you in a dark alley, but in the shining lights of the lobby restaurant of the highest class. And because you need to know how to win the fight. 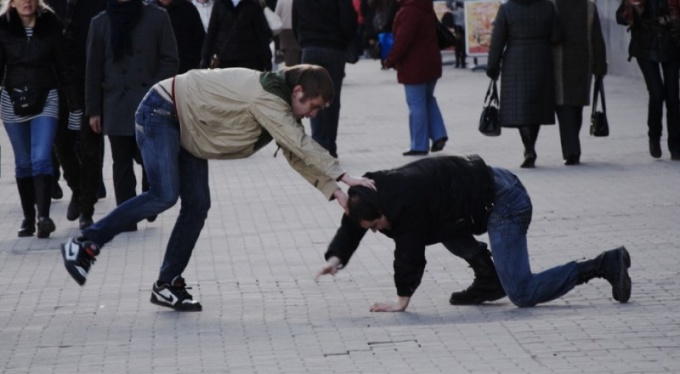 Related articles:
Instruction
1
Try to get rid of excess clothes, for which you can grab. Throw off the jacket, scarf, stay in a shirt or sweater. Try to stay away from such items as stairs or curbs - they can trip over them or get a serious head injury during a fall.
2
Take a seat next to the bench or a Billboard, which is able to cover you from behind.
3
To cope with the anxiety that arises before the fight, speak up. Talk and actively breathe. Not vratite before the opponent into the ground, move, shakes, bounce. This will prevent the attacker to grab you by the lapels.
4
If you see that the fight is inevitable, strike first. Yes, it's not gentlemanly, but you're not in the ring. But you get a certain advantage, as it hit the stationary target. Such a blow will be more effective and maybe after the fight's gonna happen.
5
Do not limit yourself to one blow. A few quick sharp blows inflict far more damage and have a serious psychological pressure. Beat a series of two or three strokes and immediately retreat to a safe distance.
6
Forget about rules of decency. Strike with the head, knees, elbows, Kushites, juicy spit in the face of the opponent. Your task is not to win on points, and remain the most intact.
7
Blows to the head, apply to the face at close range, in other cases they are useless. A heavy blow on the bridge of the nose is able to shut down your opponent for a long time.
8
Certainly do not try to get into the body or head. Hitting the legs is not less effective, as they allow to stop the movement of the opponent. A sharp kick to the Shin is one of the most painful. Hit in the groin, only if you are confident in the strength of its impact, otherwise, you will only infuriate your enemy.
9
Constantly on the move. Do not let the opponent a chance to strike a powerful blow. Avoid direct blows to the head. Do not let yourself drive into the corner to get out of there without severe damage it will be impossible.
10
The main task – to stay on the feet. If you knocked to the ground and beat feet, not lying on the spot. Move, try to creep, twist – so you will be harder to get and you will get less strikes. Strive to rise quickly to his feet. You can feign an epileptic seizure - it will confuse the opponent and give you a chance to get back in a fighting stance.
11
Stopping the attacker, do not try to finish it. Go away from the battlefield. There is no guarantee that your opponent is not in a hurry well-armed company. Best to get out of the fight whole, than fight to prove his worth to the company of aggressive people.
Is the advice useful?
See also
Присоединяйтесь к нам
New advices