How to prepare for winter Lily

Lily, his delight blooming. So for the next year to have the opportunity to admire this beauty, need to know how to prepare Lily for the cold weather to shelter and provide optimal conditions for wintering. 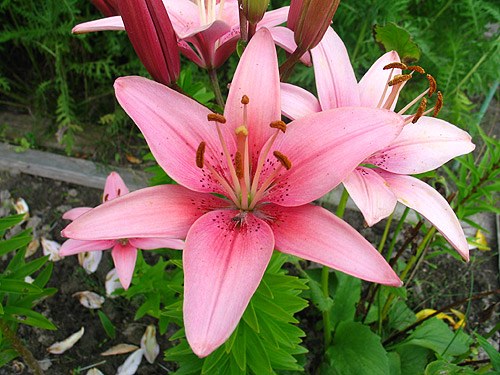 Related articles:
For Lily to care not only in spring, in summer, during their growth, flowering, and autumn but. How well prepared Lily for the winter, depends largely on how they form a bulb, will it hurt and how to take frost.

Preparing for the winter, which is a severe test for any plant, start early – immediately after flowering lilies. It is important at this time to feed the plants, then it will be in time before the frost to form a large bulb, which has more than a small chance to survive the winter. Besides from such planting material for the next year will be the large flowers.

Buds was large, after the Lily bloomed, in no event it is impossible to cut the stem, especially at the root. If you do, you are depriving the ability of the tuber to take nutrients from the stem and grow. After flowering you need to nibble the leaves with a spray bottle of Bordeaux fluid.

To Lily wintered well, you need 2 times – in early August, and early September to feed her fertilizers containing phosphorus and potassium. Nitrogen from the second half of the summer lilies are not fed.

In 5 liters of hot water dissolve a teaspoon of crushed superphosphate and the same amount of potassium salt. Mix the solution. When it has cooled to lukewarm, then pour under the root in 500 ml per plant.

The next day after watering and fertilizing the soil needs to be loosened.

Shelter of the lilies for the winter

In the southern latitudes of our country lilies are perfectly winter without shelter. In the middle – the feasibility of this procedure depends on the variety. So, the Asian hybrids, grade Royal, Pennsylvania, Daurian good winter without insulation.

In Northern regions it is necessary to insulate the tubers. A "soft" hybrids: American, tubular, insulated and East in the middle latitudes. To do this, in the mid – to-late September to cut the stem, leaving a stump, which is 3-4 cm will rise from the earth.

Lilies are moisture. Therefore, the ground under them in early October, cover with plastic wrap. Then during the winter the soil under the plant will dry and it will help Lily have a good winter.

To prepare Lily for the winter in late October on the location of the onion, pour the peat layer of 5-7 cm, and placed on top of the twigs. He will not allow rodents to damage the tuber. Put the tape and press it around the edges with stones or sticks.

Cover shoot in late April. If the weather is warm, in the middle of this month. Lily is winter and it will be lush and long-lasting bloom in the summer, flashing a glossy surface of its leaves, like a diamond.
Is the advice useful?
See also
Подписывайтесь на наш канал