Bush lilies in the garden: planting and care

Bush Lily have a huge advantage over conventional. After all, one stem of blossoms and some flowers. Besides varieties of roses lilies differ unpretentiousness and good winter hardiness. 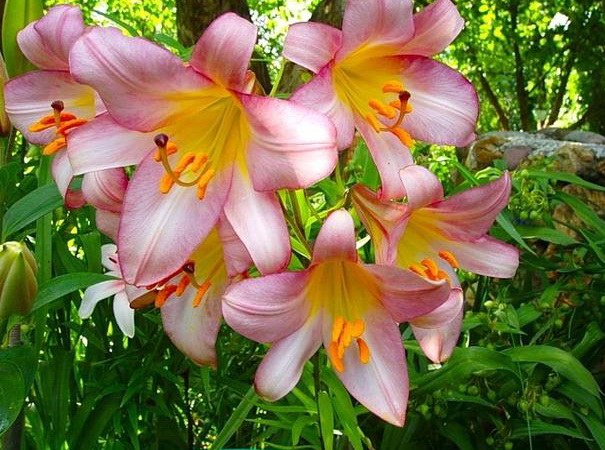 Appearance and location in the garden

Flowers lilies are very beautiful and spectacular. They have a few large petals that bloom during the day and reminiscent of the Eastern bowl. Color of roses lilies especially pleasing to the eye: Magenta, tangerine, red, white, dark-pink. Unfortunately, lilies are devoid of flavor. And it certainly is a plus if in the garden you wish to plant them near other flowers: asters, Phlox, echinaceae.

Bush lilies prefer loose and nutritious soil that is slightly acidic or neutral reaction. Put them on the site, which is well-lit and warmed by the sun. In the absence of such places flowers can grow in shade. However, do not drop off the plant under large trees, it will suffer from lack of light. Watch for soil flowers: it is impossible to prevent a lot of weeds.

Bush lilies are bred with bulbs. Drop them into the soil to a depth of 1.5 cm Up should be directed sharp part of the onion: completely fill it with dust. Place the onion plants at a distance of not less than 10 cm from each other. Planting produce in early spring or late fall. After planting, do not let the soil is very dry: soil should always be moderately moist. However, if you don't loosen it, then the bulbs may rot. - Drained soil is very important for lilies. In the winter the bulbs be sure to mask off spruce branches, peat, dry leaves, and on top put plastic wrap.

Water lilies right at the roots, avoiding water on the leaves. Under direct sunlight, the water droplets are transformed into reflective lenses. Because of this, the leaves will soon appear burns. The soil around roses lilies regularly loosen, to the roots was well received oxygen. When loosening try not to touch the roots of the instrument. Podesavate Bush of the Lily to the peg, if the stem is thin, and the place where the Lily grows, constantly blown by the winds. When cut flowers, try to keep the largest possible number of leaves. Their crop will lead to a deterioration of the blossom this year, and the next Lily may not bloom.

Bush lilies, and other flowers need fertilizers: mineral and nitrogen. Through wood ashes do not touch the plant pathogenic fungi. A small amount of manure can also be useful. However, do not use it fresh. When flowers have formed buds, then make the fertilizer ammonium nitrate. There are special fertilizers for roses. They fertilize the plant, after analyzing the instruction.
Is the advice useful?
See also
Присоединяйтесь к нам
New advices