Where to hang a dream catcher

Dreamcatcher is a traditional native American charm. It is a circle of willow branches, braided threads and sinews of deer, decorated with beads and feathers. The main task of the catcher to "catch" bad dreams and good pass through the holes in his web. 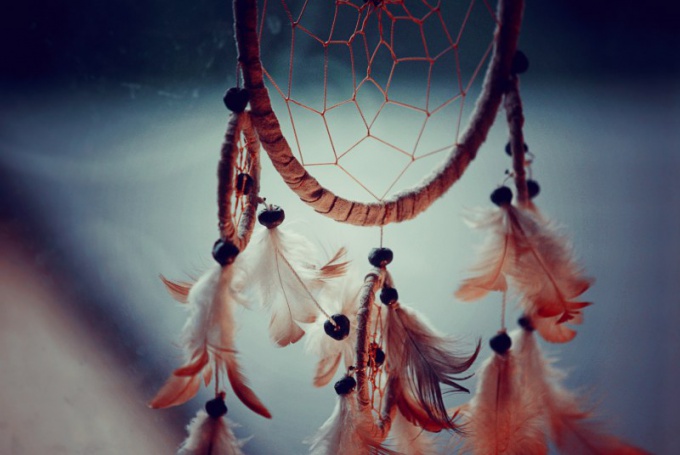 How to make a Dreamcatcher...

According to legend, the Lakota Indian tribe, the elder had a vision: the teacher of wisdom, appeared to him in the guise of a spider wove a web around the willow branches and hung it on the bird's feathers. Each circle of the web symbolized the milestone in the life of man – infancy, youth, maturity and old age. In the center he left the circle. He told elder that through the hole of the wise and good thoughts will go to the person, and the rest will stay in the web.

To this day, not only among Indian tribes, but also among many peoples of the catcher remains an incredibly popular amulet. It is sold in every souvenir shop, but it is believed that the greatest power has a catch, made by their hands.


According to Ojibwe legend, Grandmother Spider taught Usabecause Indian women to weave in the world, so that through them she could protect all his people, who settled in America. The catcher should be eight lines – the number of legs of an arachnid.

The most powerful are also considered catchers from natural materials. To produce the required dense willow branches. Bend them in a circle incredibly difficult, so they are usually boiled in boiling water to impart elasticity. Then the circle pletetsya thick thread, sometimes with a purely decorative purpose there are interwoven beads. Be sure to attach the feathers symbolize air and freedom.

Accommodation in the house of the dream catcher there are three very important conditions. The first is free passage of air through the weave. Dreams of Indian philosophy come from outside and go there, so a good place would be the window through which the air flows and through which the catcher get sunlight. By the way, the sun is the second condition.

The third condition is the catcher should be hung near where you sleep.

The ideal position of the catcher above the bed near a window. You can hang the catcher on the chandelier in the center of the room or a doorway if you have no door.

Fishers use not only the Indians but also the shamans in Siberia. These amulets are necessary for spiritual practices - the day they accumulate dreams that night can be used to induce visions.

In any case it is impossible to weigh the catcher close to the wall. But then certainly one should not expect from him any magical properties – it will be just an element of decor.

By the way, many of the owners of the amulets say that the catcher not only delays the bad dreams, but it helps one to remember dreams, it is useful for those who like to use for interpretations dream interpretation.

On the other, Ojibwe legend, Grandmother Spider taught Usabecause Indian women to weave in the world, so that through them she could protect all his people, who settled in America. The catcher should be nine main lines – the number of legs of an arachnid.
Is the advice useful?
See also
Присоединяйтесь к нам
New advices