Where to hang the amulet Dreamcatcher

Dreamcatcher is a popular Indian amuletthat protects the person from nightmares and negative impact that can have on his mind the night when the defenseless. According to legends, bad dreams, bad thoughts and evil spells tangling in the amulet, while a good pass through the hole and climb down the ropes and feathers. 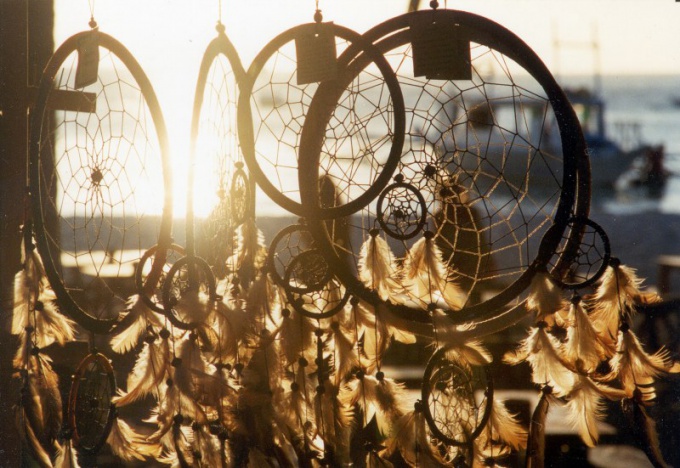 The basic rule which should be observed when using dream catchers, is that to hang such amulet need above the headboard. The decoration should be placed above the person's head, because that is how, according to legend, it protects the person from bad dreams, coming to him, and at the same time, helps to go down the good dreams, the giver of joy.

If possible, you should attach the catcher did not directly to the wall, and hung on the pin so that the amulet was located over the sleeping man, and not to the side of it. However, if this is not possible, and you can attach to the wall.

It happens that hung the amulet over the head becomes difficult. In this case, place it over any part of the bed where possible. If such an option is inappropriate, you should hang a dream catcher in any part of the bedroom. You can attach it to the chandelier in the middle of the room or against the wall.

Remember that initially this amulet made for kids, as they are most vulnerable to the negative effects of nightmares. If you want to use a children's version of the catcher, hang it directly over the crib, hung like toys. Colored feathers and intricate pattern perfectly distract and soothe babies.

It is important to remember that, according to legend, bad dreams don't fly away and get tangled in the web of the dream catcher. This means that the amulet you need to clean them every day just as the spider cleans its web from the caught victims. The legend says that doing this is very simple: the nightmares themselves are scattered under the influence of sunlight, until the next night, the amulet remains free and clean. This fact is important to consider when selecting a location for Dreamcatcher: there must be the sun is shining, even very long.

If sleeping space enclosed by a partition or curtain to the sun's rays did not Wake the sleeping man, should outweigh the catcher each morning, allowing it to be cleansed.

From time to time you can make a "General cleaning" of the amulet. It's enough to hang it in the wind under the sun or the moonlight and leave for a few hours. If you have chosen its location well-ventilated place where the rays you do not have to worry about cleaning of the catcher.
Is the advice useful?
See also
Присоединяйтесь к нам
New advices