How to do a bronchoscopy

Bronchoscopy is an endoscopic examination method of the trachea and bronchi using a special instrument called bronchoscope. This device is a flexible probe with a built-in light, a viewing tube, and a manipulator. Typically, such a study provides the endoscopist in accordance with the purpose of the therapist or the TB doctor to identify inflammation, tumors and seizure of foreign bodies from the trachea and bronchi. 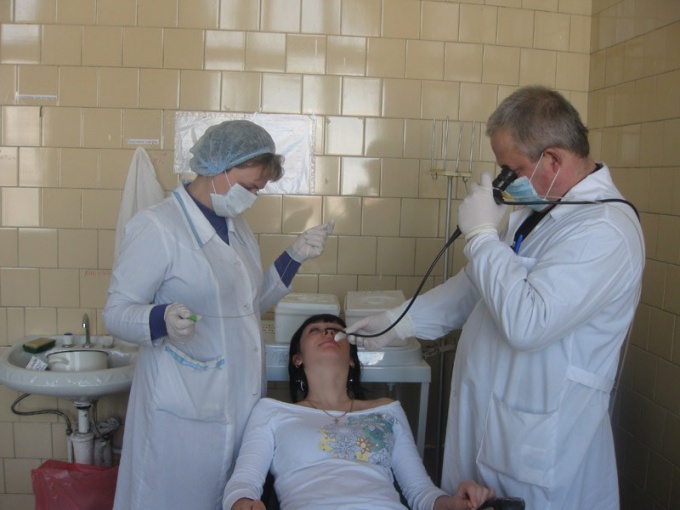 Related articles:
Usually bronchoscopy is performed in the morning on an empty stomach exclusively in the hospital, and inspection of the trachea and bronchi is carried out only after x-rays. The patient before the procedure it is necessary to clean dentures, remove the jewelry if they are on the lips and tongue, not be amiss to put on a clean shirt. In case of strong disturbances of the examined person give to take a sedative. Bronchoscopy is done in the supine or sitting position. After the patient will make the anesthesia, he through the mouth (nose) gently injected a special tool by which the physician examines the mucosa and the lumen of the bronchi, trachea. If necessary, a specialist can perform a biopsy for suspected cancer. During the procedure, the patient may be present gag reflex, a lump in the throat, with possible nasal congestion. However, not to worry, because these inconveniences are quite natural for such a procedure.

There are absolute and relative contraindications prohibiting the examination bronchoscopy the lungs. Absolute include: myocardial infarction, cardiac arrhythmias, exacerbation of asthma, pain in the abdomen, hypertension, acute stroke, neuro-psychiatric disorders, condition after a traumatic brain injury. Relative contraindications are: the period of menstruation, alcoholism, ischemic heart disease, a severe form of diabetes, the second half of pregnancy, and enlargement of the thyroid gland of 3 degrees.


What can be complications after conducting bronchoscopy

After this procedure the patient can immediately go about their usual business. However, you need to remember that eating should be only after hours after the study. Also, be aware that after removal of the bronchoscope is possible coughing up blood clots, so you must clean towel. Bronchoscopy can cause some complications, among which are noted: nosebleeds, damage to the vocal cords, insufficient flow of oxygen to the tissues, irregular heartbeat, allergic reactions and bronchospasm. As a rule, the consequences of such a procedure are held during the week.
Is the advice useful?
See also
Подписывайтесь на наш канал