What cannot and what can you eat after appendectomy

After removal of appendicitis patients is recommended diet. The consumption of certain food items speeds up the healing process and prevents the development of postoperative complications. For example, flatulence after eating beans can cause stretching of the bowel and joints, causing pain and increasing the risk of wound infection. 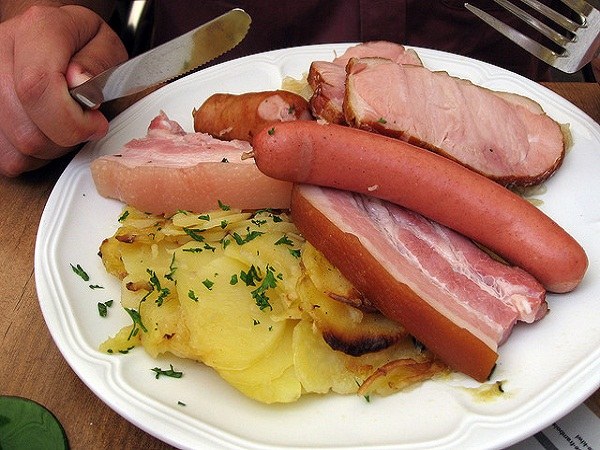 The treatment of such inflammatory diseases, like appendicitis, can be only surgical. A small process, the Appendix, adjacent to the colon and the small intestine is removed during surgery under anesthesia.

In the postoperative period the important point is the recovery of intestinal peristalsis, or the resumption of a familiar natural movements. To achieve this without damage to health is possible only with the help of diet, the main principle of which is to gradually add products in the diet.

After removal of appendicitis eat large portions should not be. Eat little and often – every 2 – 3 hours.

Is it possible to have right after surgery?

In the first day after surgery is not recommended. But to relieve the nausea and discomfort after anesthesia possible, to use clear liquid. For this purpose, suitable fruit jelly, Apple juice, warm tea, low-fat broth.

If, after the first ingestion of liquid food with no problems, and the doctor will be able to hear a characteristic noise in the intestines, so the recovery mechanism of the bowel has started successfully. Now you can go to soft food.

Mashed potatoes, boiled chicken, rice, bananas – these foods should be gradually introduced into the diet of the operated patient after a couple of days. If such food is stuck in the body successfully, the list of permitted foods expands wheat bran, buckwheat, oatmeal with dried fruit, sea fish.

Used food should not be too hot or cold. But can drink goat milk, kefirs and yogurts, fat content not exceeding 2 %.

To speed up the healing process after surgery will help the zucchini and pumpkin are rich in vitamin A. Eat them mashed, prepared from boiled vegetables.

Eating foods rich in fiber not only fills the body with nutrients, but also helps to prevent constipation that may occur due to the lack of motor activity of the patient. But despite the benefits of dietary fiber, introduce them into the diet once in large quantities should not be, because they can cause increased gas formation.

Foods not allowed to eat after appendectomy

In the first 2 – 3 days after surgery can not eat solid food, even brought to a state of mashed potatoes and drinking milk. Next 2 – 3 weeks set a limit on the consumption of fatty broths, carbonated beverages, dishes, flavored with spices, pickles and smoked.

All kinds of cabbage, meats, fatty pastries and varieties of cheese, cheese and fast food outlets after removal of appendicitis should also be excluded from the diet. If in the postoperative period there were no deviations from the digestive system, the doctor removes restrictions in the diet and to prevent constipation recommends that you drink about 10 glasses of water a day. And in a month after surgery to begin light exercise.
Is the advice useful?
See also
Подписывайтесь на наш канал