How to fry mullet

The mullet is a saltwater fish with delicate white meat. It is especially good cooked on a pan in the oven and on the grill. To cook the soup and simmer mullet is not accepted – the fish loses its delicate taste. 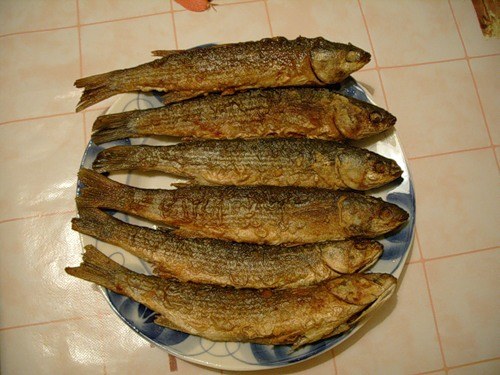 Related articles:
You will need
Instruction
1
Fry mullet in the pan.

Fish cut into portions. Sprinkle with salt and ground black pepper, zapaniruyte in flour. Heat the oil in a frying pan and sear the fish on both sides until browned.

Serve ready mullet with fried potatoes. Pour all the oil on fish put a slice of lemon and garnish the dish with dill or parsley.
2
To cook fried mullet in Chinese, the fish clean, and RUB with salt and ground black pepper to taste. Whisk the eggs. Mullet dip into the egg batter, then obvalivat in bread crumbs and fry (cut into pieces) fried.
3
Mullet you can fry in the oven.

Clean and gut the fish. Make it cross cuts. RUB with salt and pepper to taste, sprinkle with lemon juice. Pan grease with vegetable oil, put on her fish. On top pour the remaining oil and lemon juice. Preheat oven to 200 degrees and put the pan. Fry the mullet for 20-25 minutes.

The finished dish sprinkle with parsley.
4
Very tasty mullet in anchovy sauce. This dish is cooked using the grill.

Warm up the grill. Mullet peel and disembowel. On each side of each fish make diagonal cuts. Anchovy fillets, cut into 4 pieces each. Place a slice in the slots.

Flour salt and pepper to taste. Roll it the mullet. Then brush the fish with oil, place on very hot grill and cook until tender. The crust should be browned and crispy. Put the mullet on a dish. Drain from pan and grill the resulting juice.

Mix the remaining pieces of anchovies, tomatoes, orange juice, juice from the pan. Put all on the fire and boil until the state of sour cream. Pepper sauce. Pour it over the fish. Decorate the finished dish with capers and orange slices.
5
For a family dinner, prepare original dish – mullet-fishing.

Clean the fish, gut it. Remove gills, fins and tail. Rinse under running water. Large mullet cut in half. Fold the product into a bowl, add salt, pepper, cover with milk and leave to stand for at least 10 minutes. Then roll the fish in flour and fry in vegetable oil until Golden brown. Put the product in the baking dish.

Finely chop the tomatoes, onions, carrots, and parsley. Spoon the mixture into a heated pan with vegetable oil, fry, add a little water and simmer 30 minutes on low heat. Then remove the pan from the heat and allow the mixture to cool and strain it. Grind vegetables using blender or RUB through a sieve. Again put the mixture on the fire, add salt to taste, sugar, black pepper, cumin. Pour in a little vinegar. Stir and bring to a boil.

At the same time mix in cream or sour cream with flour, pour in the boiling sauce, let it boil again and pour over the mullet. The form, close the lid and place in the preheated oven for 5-7 minutes.