How to cook Kaluga

The Kaluga sturgeon is a freshwater fish of the sturgeon family, listed in the Red book of Russia and the international Red book. The area of its habitat is extremely small: in fact, it is only the basin of the Amur river, it is occasionally found off the coast of Sakhalin, Hokkaido and the Northern coast of the Okhotsk sea. To catch Kaluga currently allowed only for scientific purposes. However, recipes for this fish is not yet forgotten. 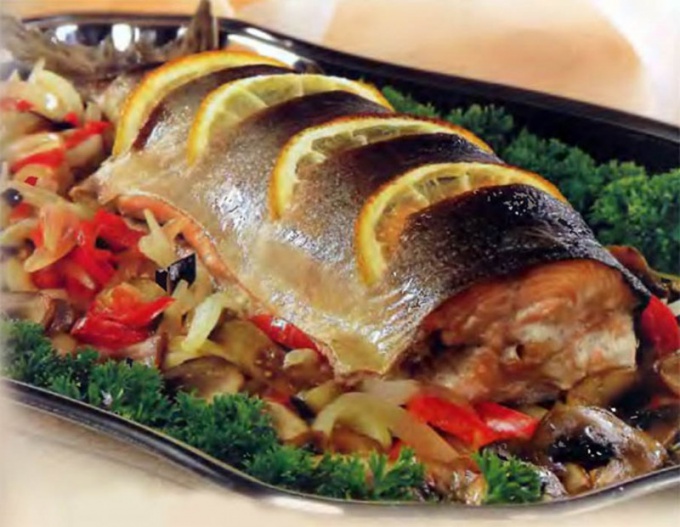 Related articles:
You will need
Instruction
1
Kaluga-Moskovskaia fish fillets flat pieces, heat the oil in a pan, fry the fish on both sides. Cook mushrooms in salted water, chop onions, wash and peel the potatoes, cut them into small slices. Fry in a pan onion until Golden brown in separate pan, fry the potatoes until cooked.
2
Boil eggs, cool, cut into wedges, grate cheese on a coarse grater. Fry in butter flour, pour a thin stream of the broth, stir to avoid lumps, add the sour cream and cook over low heat for 10 -15 minutes. Remove the sauce from heat, season with salt and pepper, add the rest of butter.
3
Grease a heatproof dish, put in the center pieces of fried fish, around fish – fried potatoes. Put on top of fish and potatoes fried onion, slices of boiled eggs, cooked white mushrooms. Cover with cream sauce, sprinkle with cheese and bake in the oven until the cheese melts enough to become homogeneous.
4
Steak calogeromoser fillet, cut into pieces of a palm size. Heat the oil in a pan, fry fillets on both sides in high heat for 1-2 minutes. Place the fish on the foil and squeeze the garlic on top, season with salt.
5
Wrap the fish in foil and put in the oven until cooked. Chop the dill, sprinkle it on the finished fish, wrap again in foil.Leave to simmer for turned-off oven until the oven has cooled.
6
Kaluga potatoes with mushroom zosavanie potatoes, boil in "uniform", peel, cut into slices. Boil in salted water mushrooms, coarsely chop, slice onions, heat the pan fat or oil, put in mushrooms and onion, fry for 5 minutes. Through a sieve sprinkle mushrooms and onion with flour and fry for another 3 minutes, then place in a saucepan.
7
Boil 2 cups of water, add salt, add the Bay leaf and pepper, pour the mushrooms and onions, cook over low heat until the mixture thickens. Fish fillets cut into portions, salt, bread and fry on both sides until Golden brown. Grease a baking dish with oil, place onions and mushrooms on top of the fish, surrounded by the potatoes, sprinkle with rest of breadcrumbs and bake in the oven for 10 minutes.
Is the advice useful?
See also
Подписывайтесь на наш канал