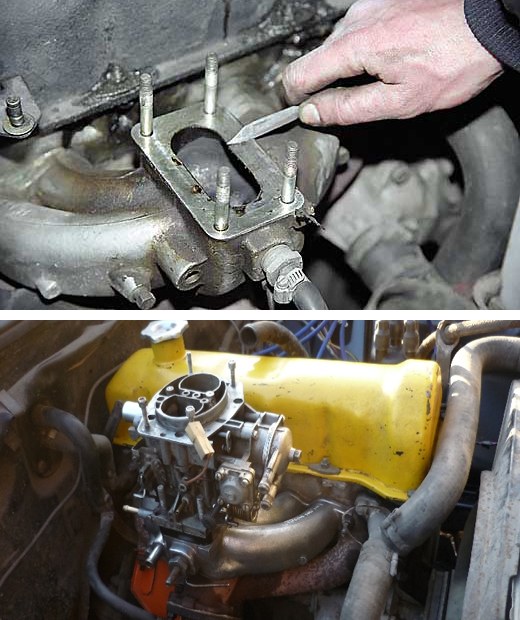 Related articles:
You will need
Instruction
1
Reinstall contactless ignition system as the carburetor "Solex" configured to run lean. To ignite it, you need a powerful discharge, which produces ignition coil( up to 25 kV). Set the gap at the spark plug within 0.7-0.8 mm.
2
Check before installing the fuel level in the float chamber. To do this, Unscrew with a screwdriver the five cover screws of the carb, remove it, flip it, and measure the clearance between the gasket and the bottom of the floats, it needs to be 1mm. Check the tightness of the needle valve. Put the lid back on. Check the start gaps of the throttle and choke (1/2. 5 mm respectively). Put the discharge of fuel to the input of the fuel pump.
3
Install the carb. The engine must be cold. Remove the old carburetor "Ozone" and the old gasket, put the gasket paronitovye, then it is thick plastic, then on top of cardboard and put a "Solex". Nuts not prikruchivayte.
4
Put under the nut closer to the engine bracket from the set of adaptors and rods. Install duplici lever, which is removed from the bracket on the lid of the cylinder head. Replace the short rod from the pedal to long. Adjust its size. Attach the spring closer to the pedal. Replace throttle cable choke cable from the car VAZ 2108.
5
Connect the heated throttle bodies. To do this, remove the coolant tube from the intake manifold and put it on him and fasten it with the clamp on the pipe heating the carb. Put the other end of the thin pipe is the hose for the antifreeze to the intake manifold. It must have, because when there is no heating in the damp cool weather may occur icing of frost on the edge of the flap, which leads to unstable operation at idle. For the selection of the distributor vacuum take off the bottom fitting on the right, if you look at the course of the car. Connect the crankcase breather to the fitting on the bottom of the carb, which is directed towards the cabin.
Note
The carburetor provides a combustible mixture corresponding to the composition operation of the engine. On most modern engines are multi-chamber carburettor with a falling stream and balanced the float chambers.
Useful advice
Automotive carburetor. The carb with the parallel opening of the throttle valves of the Carburetor with a consistent opening of the throttle plates. The car's engine has five operating modes: start, idle, average (partial) of loads, an abrupt transition from medium to full load and full load.
Is the advice useful?
See also
Присоединяйтесь к нам
New advices