How to run ms-dos mode

Even today, in some cases not to do without programs that are designed to work in the operating system DOS. But this OS on the computer may not be. You have to use compatibility modes or different emulators. 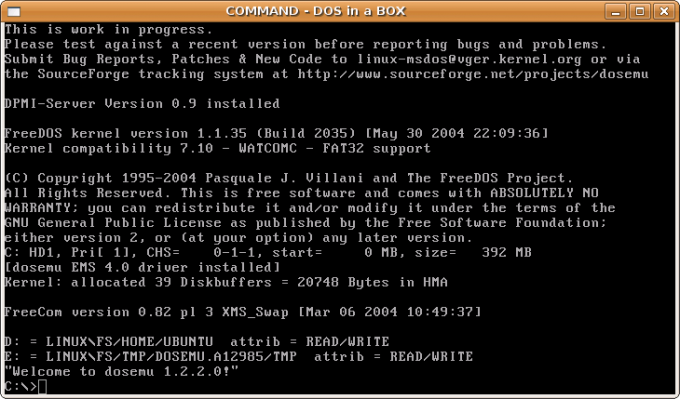 Related articles:
Instruction
1
Before you run the DOS mode on the computer where this missing operating system, consider to install on a separate machine real DOS. Though MS-DOS is now not sold anywhere else, so you'll have to use the modern OS in this class - PTS-DOS or FreeDOS. This is a very good operating system with a high degree of compatibility with MS-DOS. However individual programs may not start correctly or earn, but there is very little (a few percent).
2
If the computer's operating system is Windows 95 or Windows 98, click turn off computer, select restart in emulation mode MS-DOS. In these OS it is possible to select the appropriate mode before booting, if you hold down F8.
3
To run under Windows DOS with the preservation of multitasking, press the start button, then select the menu item "Run" then enter without the quotes the command (in Windows 95, 98 or Me) or cmd (in Windows 2000 and above). Then run the DOS program from the command line. The key combination of Alt and Enter if you wish, activate or deactivate full screen mode. Degree of compatibility with DOS such a regime is quite low.
4
In the Linux operating system, provided that it is running on a processor compatible with x86, to use DOS emulation software package Dosemu. It is good because it only emulates the operating system itself DOS, but not the CPU. This allows to achieve a significant performance even on slow machines.
5
For high-quality DOS emulation in Linux and Windows running on computers with processors of any architecture, use DOSBOX. It works slower and requires more RAM, since it emulates the processor.
6
More resource-intensive way DOS emulation is to use cross-platform software package Qemu. It emulates a computer with a processor, BIOS, virtual hard disks etc. on Top of it can be running almost any OS. Running the emulator, set the operating system PTS-DOS or FreeDOS.
Is the advice useful?
See also
Подписывайтесь на наш канал