How to tighten spokes

The motorcycle, like any other transport, it requires timely care and routine maintenance – only if the motorcycle is properly looked after, it properly served the owner for many years. Often on a motorcycle have to adjust the position of the spokes in the wheels, pulling them, and this task can handle any rider, not resorting to services of professional mechanics. 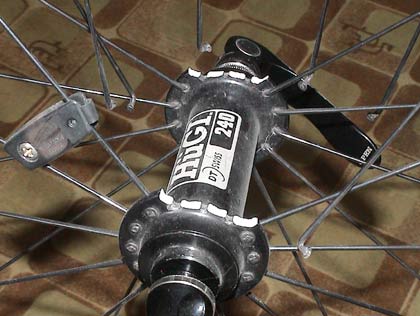 Related articles:
Instruction
1
To start, tighten up the nipples of the spokes one at a time to evenly tighten them by turning the nipple with no effort on 180 degrees. Then repeat the tightening of the spokes, twisting the nipple again, overcoming a slight resistance.
2
After that secure the wheel axle in a special vise to any smooth surface, which must be parallel to the plane of the wheel and start to straighten those spokeswhich are deformed most of all (for example, form a figure eight).
3
Secure on the edge of the working surface of the caliper with the clamp parallel to the axis of the wheel, so that the depth of the caliper rested on the side of the rim. Number and mark the spokes that need to be pulled, by means of adhesive tape.
4
The point of a depth to abut the rim opposite to the first spokes, and note the resulting size and then measure this distance in front of each of the spokes after one revolution of the wheel. Measure the range of values between the minimum and maximum size – if the figure exceeds 1.5 mm, then the wheel to them.
5
Enter the number with the chart in Excel in order to introduce new indicators and test which way is changing the range. Enter the desired number in the range between the values, run the file and determine what kind of spokes according to the numbers you need to pull to achieve a better result and fix the wheel.
6
Then tighten up the nipple of each spoke, which was not included in the "corridor" of values, assuming that 1 mm difference is equal to 90 degree turn. Tighten all loose spokes, which are not included in the "corridor" after the second recount. Re-measure as described above, the distance from the spokes to the rim, and then check the schedule.
7
Tighten the spokes as long as the number on the chart shall not exceed 1.5 mm. If you fix it not "eight" and "egg", strengthen the caliper is not parallel and perpendicular to the axis of the wheel.
Is the advice useful?
See also
Подписывайтесь на наш канал