How to transfer one image to another in Photoshop

In order to create beautiful, realistic collages, it is often necessary to superimpose one image on another, or to move an object from one photo to another. Photoshop provides a wealth of opportunities. 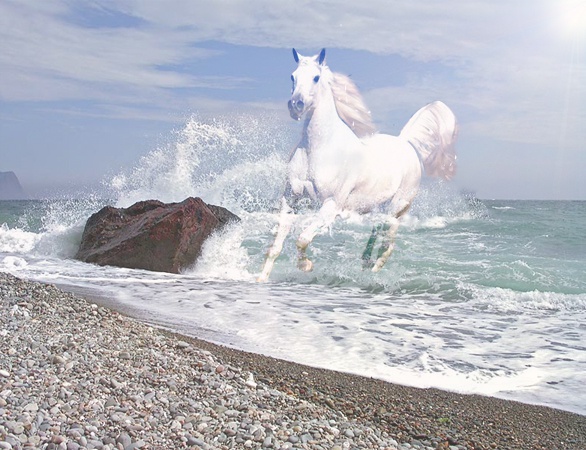 Related articles:
You will need
Instruction
1
First you need to isolate the part of the image you will be moved. Open the photo or image in photoshop. On the toolbar, select the Magnetic Lasso Tool. Hover the cursor over the desired object and draw it. If you stroke when you grab part of the background, undo a mistake by pressing the Backspace key. When the desired location is completely circled, double-click the left mouse button.
2
Now you need to save the selected object in a memory buffer. It is easiest and faster to use the key combination Ctrl+C.
3
Open the second image where you will put the saved object.
4
On the layers panel, simply double-click the layer to unlock it, and click the second from right button Create a new layer. Then paste the image from clipboard by Ctrl+V.
5
Then the fun begins – turning the two parts in a realistic image. Since in this example the horse is in water, applied to the layer blending mode Overlay – now the picture has become more plausible.
6
However, the smooth line of water looks awful. To correct this deficiency by using the Clone Stamp Tool, adding foam and waves around the figure of the animal. Create a new layer above the layer with the horse, name it "Foam". Choose the Stamp on the toolbar. Go to the layer with the sea. Hover your cursor on the pictures where a lot of foam, and press Alt. Inside the circle appeared a cross, it means that the tool remember the segment you want to "clone". Now go back to the layer of "Foam" press left mouse button and draw a line. The cross that you have marked a sample of the drawing, moves in parallel to the cursor. On a new layer appears in the pattern, who is on the cross.
Carefully choose the sites for cloning, ensure that the correction made the image more realistic. If you don't like the result of some action, you can cancel them. To do this in the main menu, choose Edit points, and Step Backward.
Useful advice
If you will be creating the "land" collages, be sure to consider the lighting conditions and don't forget to add shadow to the objects that you have inserted in the new image. Ensure that the brightness and saturation of the imported element does not differ from those of parameters of the basic image.
Is the advice useful?
See also
Присоединяйтесь к нам
New advices