How to write a statement to the police about the threat

The police are obliged to record all messages on the perfect or preparing crimes, or reports of threats that come to him from citizens from legal entities. And to verify any information that became known from other sources, including the media. However, life often occurs in another. Therefore, a properly drawn up statement is the key to rapid consideration and adoption of timely measures to suppress criminal activities, apprehend criminals and to minimize the harmful effects caused by criminal acts. 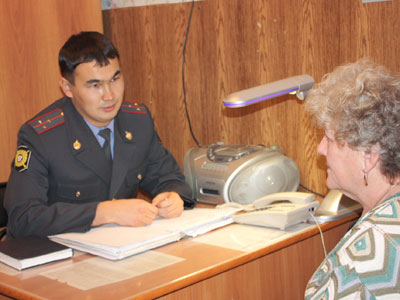 Related articles:
Instruction
1
Writing statements about the threat starts with the completion of the so-called "cap", which, as a rule, located in the upper right corner. It specifies the name of the authority or officer to whom you refer, his rank or class rank, surname, name, patronymic of the applicant, residential address and, where possible, specified and contact telephone number.
2
Further, the center drains to spell the word "Statement". Then in freestyle it is necessary to explain the essence of danger. Better to take smaller clear sentences that contain only facts of importance. In the statement it is better to avoid any kind of expressions like "perhaps", "probably". If you have documentary evidence of imminent danger to you or already committed a crime, and attach copies of these documents, putting them in a list and the number of sheets in the text of the statement.
3
After a statement of fact indicate its request to consider your application in accordance with the current legislation (in the text it is possible to make links to the relevant articles) and to conduct procedural checks on these in the statement of facts. You can add a clause on the written notice about the decision on your application. It should be to make sure that you have had the opportunity to appeal in case of disagreement with the results. Just in practice this rule is often violated, and the applicant sometimes is a long time in the dark, and then precious time is lost, and to achieve becomes difficult and sometimes impossible.
4
The last line in the Declaration must specify the fact that you are warned about criminal liability under article 306 of the Criminal Code for knowingly false denunciation. This record would deprive a police officer a reason to reject your application because of possible false accusation and the absence of any responsibility for it. Then sign the application, decipher his signature, putting next to their surname and initials, place the current date.
5
Prepared statement take away nearby the police station and refer to the duty that it took. Don't fall for excuses such that it is necessary to apply at the place of the crime or that the statements are accepted at a certain time. According to the instructions, the reception and registration of messages is around the clock and in any Department. If the crime is committed elsewhere, your request will be forwarded to the appropriate investigative jurisdiction in the area where it should be carried out its examination on the merits. Just when submitting the application at the crime scene, and you save time for its shipment to another Department.
Note
A Declaration of risk you can apply in writing and in oral. The text of the statement must record, in your words, to deny that you don't. Oral statements are made by completing a Protocol on the acceptance of oral statements.
Useful advice
In the preparation of the statement in the police Department, employees often dictate everything that you want to specify. In such cases, carefully follow the written text and do not agree to write something with which you disagree.

When writing an application, you can find on the Internet the approximate shape and print the text on the computer. After all, calligraphy is not everyone, but the printed text will save the police from spending time and effort deciphering your written text.
Is the advice useful?
See also
Присоединяйтесь к нам
New advices