How to cook soup

Ukha is a hot liquid fish dish, which many mistakenly think of fish soup. It must be remembered that ear, and fish soup is not the same thing. The tradition of cooking soup evolved over the centuries. Today to cook the soup knows not everyone — after all, cooking soup implies certain rules of selection of fish, a selection of special dishes, a certain order of the bookmark of vegetables and spices etc. 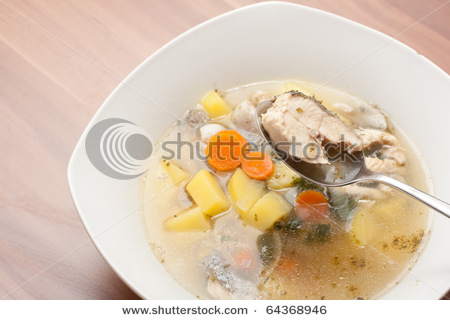 Cook soup only in stainless utensil — earthenware or enameled. Soup is a classic Russian recipe, should cooking of such fish varieties that differ in flavor and provide a clear broth (perch, whitefish, ruff, perch). However, you can add a fish that has a rich taste in the first place is sturgeon, bream, crucian, burbot, IDE or Beluga.

Traditionally Russian ear is not prepared from a single species of fish, and several (usually combine two or four fish). Exception — the ear of the red fish, which is usually a fish only one species. Some types of fish is categorically not suitable for cooking soup — for example, roach, bleak, gudgeon, mackerel, gobies. Such fish can be used for the preparation of fish soups, but cook soup of them. You can cook the soup and of sea fish — halibut, cod, womera, Swamy, nototenia.


Ideally, to cook the soup you need fresh fish, for example, directly on fishing. Vegetables in soup should be putting a minimum — usually limited to onions, a small amount of potatoes, carrots. And here is a set of spices for cooking soup can be quite wide: parsley, saffron, leeks, dill, fennel, anise, tarragon, Bay leaf, parsnips, nutmeg and black pepper — choose those spices that, in Your opinion, improve the taste of food.

Cook soup, depending on the type of fish — freshwater fish cooked at least twenty minutes, and the sea — from 8 to 12 minutes. Marine fish cannot digest — in this case, the meat can become tough, but using it as the base broth is less flavorful. A little secret of cooking the right soup is that it cooks without the need of the cover on a slow fire in an open pan. The main indicator of the quality of the finished soup — the transparency of the broth and the bright white color of the fish meat. CCS serve with black bread or pies. So, how fast and at the same time to properly cook a fish soup of river fish at home?

We will need: half kilo of fish, two liters of water, two onions, two potatoes, one small carrot, a root and parsley, one root of parsnip, one tablespoon of fresh or dried dill, Bay leaf, tarragon, 8-10 peas of black pepper and salt to taste (about two teaspoons).