What fish is the tastiest fish soup

Properly welded chowder is insanely delicious and flavorful dish that can replace even the most hearty meat soups. Modern cooks went ahead and cooked this soup not only fish, but also with the addition of seafood, different vegetables and other ingredients. So what kind of fish you can cook the most delicious soup? 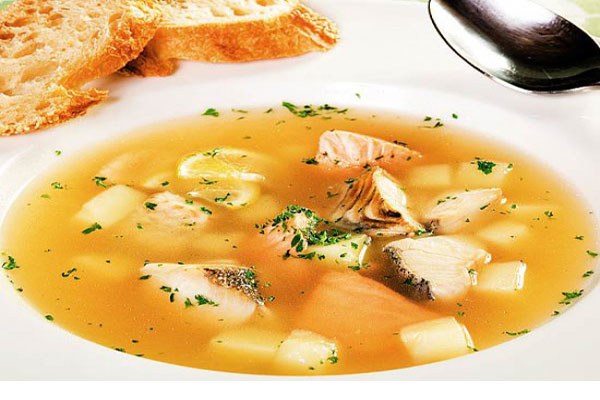 Since Imperial times, when the ear has also been called "gravy" and "muck", this dish is divided into ordinary and festive variety. The latter is also called "red soup" and "soup the old way and use valuable varieties of fish: sturgeon, stellate sturgeon, Beluga and salmon. This dish had a very appetizing amber color and extra flavor he gave then imported from distant countries, and now widely available saffron.

If you can't afford buying a whole fish from the family of Sturgeon or Salmon, there is quite a reasonable way – you can buy the so-called fish by-products. They need to cook soup, and the rest of the fish is only for additional "grounds" in the dish. For oily and nourishing byproducts include fish head, tail and trim abdomen. But there are some nuances of cooking. For example, you need to very thoroughly clean the head, as the presence of gills can already tell the finished dish superfluous and does not need the bitterness.

An excellent option is also a combination in one dish of offal sturgeon and salmon. This ear can be a real festive dish worthy of the literally Tsar. If you managed to purchase sturgeon products, then be sure to clean the pieces of fish skin, so as she can tell the dish is not a very pleasant taste.

Other options of cooking soup

This dishes are suitable for almost all kinds of fish that can be caught in Russian rivers: rockfish, whitefish, perch, pike, tench, burbot, catfish, IDE, roach, holovli, carp, Chub, bream and many others. In this case, again, it is better to combine in one dish several varieties, as each of them gives the soup its characteristic. For example, it is believed that ruffe and perch misleading dish stickiness, and burbot – sweetness.

If the preparation of the soup is used at least 3 varieties of fish, it is called a "team", and in the old days, a delicious soup is revered not only one that was brewed from "noble" materials, as well dish, in the preparation of which used small river fish.

But in General, for almost all variations there are the same rules – a whole fish to cook you can not in any case, it must be gutting, washed and cleaned from the scales; you need to strain the broth after cooking; the broth at the stage of its preparation it is necessary to add onions and carrots, which impart a pleasant flavor and not muddy color.
Is the advice useful?
Подписывайтесь на наш канал