How to write the numbers in the square

It is believed that the usual way of referring to the extent to which elevated any number, invented by Descartes. He, of course, did not come up with the idea about how this one and the design will have to enter from the computer keyboard. But if a civilization were able to create this very computer, and with something as simple as the font formatting in accordance with the usual standards of mathematical operations too. 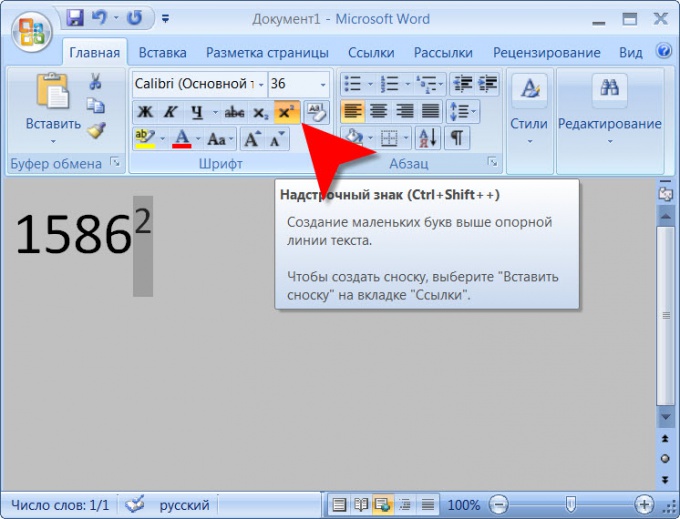 Related articles:
Instruction
1
If you want to write the number in the square with an editor that does not support text formatting, it is best to use programmers invented a way to denote powers of "circumflex". This icon is in between numberm and its degree and first appeared in the BASIC language. Before him, there were other options, but they are not spread enough. And this sign is now often used to denote the degree of outside computer. Keyboard the circumflex is entered by pressing the SHIFT and 6 must be enabled English keyboard layout. Looks the number in the square using the circumflex, for example:1586^2
2
The other method applies to editors who know how to shift the baseline of individual letters and numbers up or down in relation to adjacent signs. This gives you the ability to use the usual "Cartesian" designation of the degree. Usually characters with this bias is called the "upper (or lower) index", and sometimes "Superscript (or subscript) sign". For example, in a text editor Microsoft Word to write the same number 1586 in the square, first dial 15862, then select last pair and click the icon with the x in the square. It is placed in the section "Font" section of the "Home" menu of the editor.
3
If you want to write the number in degrees in the source code of a web document, use the command that tells the browser that the letter which denotes the degree must be shifted up relative to the baseline the rest of the text. Such command on the language HTML (HyperText Markup Language "hypertext markup language") are called "tags". You need a tag consists of the opening<sup>) and closing (</sup>) of the parts between which is placed the figure indicating the degree number. For example, this HTML snippet of the page might look like this:1586<sup>2</sup>
Is the advice useful?
See also
Подписывайтесь на наш канал