How to remove black eye

Unfortunately, none of us is immune from this trouble as injuries and consequently bruises. After injury there appears a bruise – purple stain, which gradually becomes lighter. Especially sensitive and thin skin around the eyes, in this place bruises are particularly strong. However, there are many ways that will help you in a few days to get rid of a black eye. 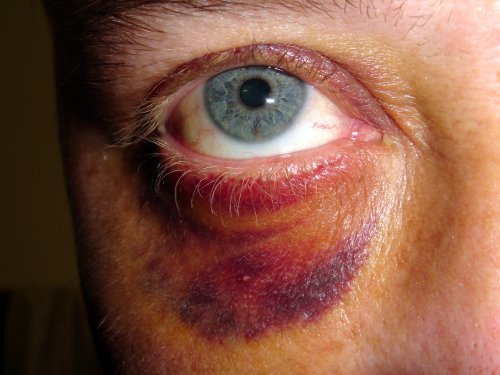 Related articles:
You will need
Instruction
1
The most famous and popular tool in the fight with bruises – badyaga. Dilute two tablespoons of powder badyagi in one tablespoon of water. Stir thoroughly and carefully applied to the injury site. To impose badyagu under the eyes should be especially careful, because it can cause eye irritation and lesions of the iris. After the pain dries, it should be thoroughly washed off with warm water. To apply this paste under eye area preferably twice a day.
2
Another proven method of getting rid of a bruise vodka. Mix equal proportions of vodka and water. Freeze in the freezer to form ice cubes. And attach this cube to the place of the bruise as often as possible.
3
A very effective means of getting rid of a bruise the cabbage. Cabbage leaf to repel from two sides or mash until until the sheet begins to stand out juice. Applying cabbage leaf in place of bruise. It's especially helpful if you apply it immediately after injury.
4
Mix one tablespoon of honey with one tablespoon of vegetable oil. Add the yolk of one egg and a little flour. Mix thoroughly to the consistency of thick slurry. The resulting mixture was put under the eye as a compress and leave for the day.
5
Mix 2 tsp. of the bark of viburnum, 2 tsp celandine and 1 tbsp of aloe. The resulting mixture should pour a small amount of boiling water and leave to infuse for 30 minutes. Moisten a cotton swab or piece of gauze in the prepared infusion and apply under eyes. Leave for 20 minutes and rinse with cool water. This tool will help to narrow the blood vessels and promote early healing.
Useful advice
Immediately after the injury, try apply ice or another cold item to avoid the appearance of a bruise. In any case, no need to warm the injury site. Eat fruits and be sure to include in the diet of ascorbic acid.
Is the advice useful?
See also
Подписывайтесь на наш канал