How to fillet sturgeon

Sturgeon is considered to be the most valuable commercial fish. From its delicate flesh, you can prepare a Royal lunch, and caviar and even belongs to the most exquisite delicacies in the world. Not to spoil the taste of future dishes, it is very important to avoid mistakes when cutting the carcass. 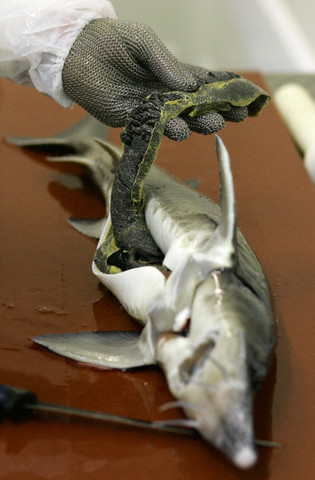 Related articles:
You will need
Instruction
1
In the intestines of sturgeon in a huge variety of fruit, the causative agents of botulism, that is why it is so important that directly before dissection sturgeon was still alive. Remember the saying about the second freshness, which just should not be?
2
If you know or at least suspect that the egg-bearing fish, gently vsporite her belly, take out the eggs, followed by the inside. Proceed very carefully so as not to offend the gallbladder. Meat that spilled bile, it does not save, it will only throw.
3
Cut off the head together with the pectoral fins, from there you can get a wonderful jelly. Douse it with boiling water, cut the seal, or as they are called – bugs. Remove the gills, cut the head into several pieces.
4
The next step is to remove the vesiga. This spinal lived along the entire body of fish is considered poisonous and to use it for food without specialized treatment is impossible, so better not to risk it. Take sturgeon by the tail, make a circular incision in the skin at his base, pick it up, vesiga will slide out by itself.
5
To remove plaque along the entire body, the carcass should be parboiled, a big fish for this procedure will have to cut the cross pieces. If you do not want to bother, just cut them together with a strip of leather.
6
Cut sturgeon can be cut into portions or leave whole, it all depends on what the dish you plan to cook from this king-fish.
Useful advice
Portions of sturgeon carcasses it is best to cut at an angle of 30°.
Is the advice useful?
See also
Присоединяйтесь к нам
New advices