How to determine the type of conic curve

The answer is quite simple. Transform the General equation of a curve of second order to the canonical form. The desired curves are only three, and it is an ellipse, hyperbola and parabola. The form of the relevant equations can be seen in additional sources. There you can verify that the full procedure of reduction to canonical form should be avoided because of its bulkiness. 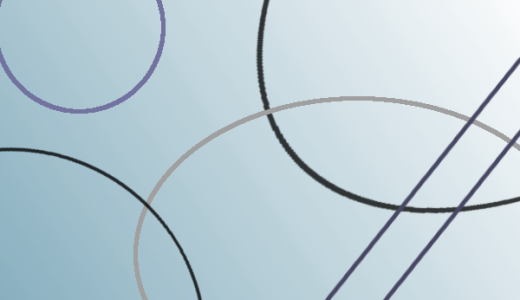 Related articles:
Instruction
1
Question about clarification of a curve of the second order is more qualitative than quantitative task. In the most General case, the solution may start with the given equation of the line of second order (see Fig. 1). In this equation all the coefficients are some constants. If you have forgotten the equation of ellipse, parabola and hyperbola in canonical form, view their additional sources to this article or any textbook.

2
Compare the General equation with each of those canonical. It is easy to conclude that if the coefficients a≠0, C≠0, and their sign are the same, after any transformation leading to the canonical form, the resulting ellipse. If the sign is hyperbole. The parabola will meet the situation, when the coefficients or A or C (but not both) is zero. Thus, the response is received. Only here the numerical characteristics no, except for those coefficients that are specific to the problem statement.
3
There is another way of obtaining answer to a question. This application of the General polar equation of curves of second order. This means that in polar coordinates, all three fit into the Canon of the curves (Cartesian coordinates) are written almost the same equation. And although it is in the Canon and does not fit – is possible here the list of curves of the second order to expand indefinitely (aplicata Bernoulli, Lissajous figure, etc.).
4
We restrict the ellipse (in General) and hyperbole. Parabola occurs automatically, as the intermediate case. The fact that the original ellipse is defined as locus of points for which the sum of the focal radii r1+r2=2a =const. For hyperbole |r1-r2|=2a=const. Put the foci of the ellipse (hyperbola) F1(-c, 0), F2(c, 0). Then the focal radii of the ellipse are equal (see Fig. 2A). For the right branch of the hyperbola, see figure 2b. 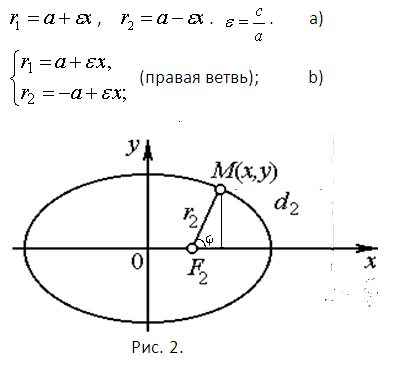 5
Polar coordinates ρ=ρ(φ) should be entered using the focus as the polar center. Then we can put ρ=r2 and after some transformations will get to the right areas of the ellipse and the parabola, the polar equations (see Fig. 3). While a is the semimajor axis of the ellipse (the imaginary for the hyperbola) is the x coordinate of the focus, about the parameter b in the figure. 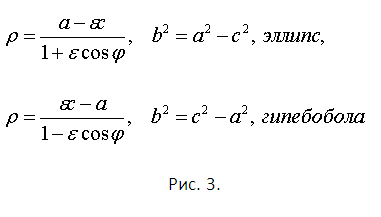 6
Given the formulas of figure 2, the value ε is called the eccentricity. From the formulas of figure 3 it follows that all other values with it as in any way involved. Indeed, since ε is connected to all the main curves of the second order, based on it and can make major decisions. Namely, if ε1 is hyperbole. ε=1 – parabola. It has a deeper meaning. In a much extremely difficult course "equations of mathematical physics" classification of differential equations is made on the same basis.
Is the advice useful?
See also
Подписывайтесь на наш канал