How to wrap bandage

Compression therapy is used for chronic venous insufficiency a long time. This type of treatment is considered most effective to preserve the elasticity of the veins. Properly fixed elastic bandage eliminates the possibility of reverse blood flow, eliminating venous stasis. There is a reduction of the diameter of the veins, swelling subsides, a feeling of heaviness in the legs, characteristic of the disease is greatly reduced. 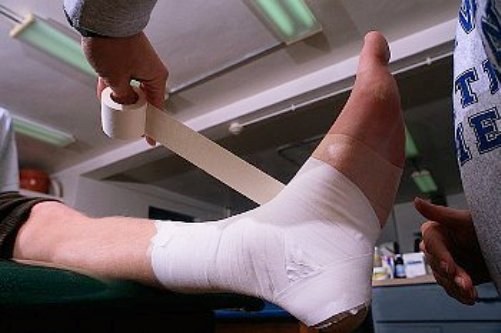 Related articles:
Instruction
1
Bandaging is useful when any kind of venous insufficiency, but should correctly be applied to secure the bandage. Pick up an elastic bandage, required width, length and degree of stretching.
2
Just before bandaging lay down with legs above the head for 10 minutes.
3
Put the end of the bandage on a slightly raised leg on the foot from the ankle to the base of the fingers and bandages from the bottom up the drumstick and thigh.
4
Each layer of the bandage overlay overlapping with the previous one for 50-70%. The strongest tension of the bandage should fall in the ankle, the top foot tension should decrease.
5
Be sure to lock the spiral bandage on the heel, the so-called "lock", it eliminates the slippage of the bandage during movement.
6
The last layer of bandage put on 5-10 cm above the affected area veins. The end of the bandage secure clip or safety pin.
7
After applying bandage walking for 30 minutes, with the right imposition of bandage resting the fingertips might turn blue, but when driving everything should return to normal.
8
Recommended to apply an elastic bandage on the wrist, if the work involves heavy load in his arms. Wrap a full circle, starting from the inner side of the wrist.
9
Make the turnover of the bandage diagonally down through the outer part of the hand between the thumb and forefinger and across the palm back to the wrist.
10
Then wrap the bandage around the wrist and repeat the second circulation "eight".
11
Wrap your wrist and make a few turns up the hand, half covering the previous layer. Secure the bandage safety pin.
Note
The use of elastic bandages is recommended for reducing the pain associated with the professional work associated with prolonged standing, repetitive posture, athletes with injuries of the feet and hands, etc.
Useful advice
Elastic bandages are recommended to wash in process of pollution, but at least 1 time a week. Do it better by hand, pre folded in a special bag for washing clothes.
Is the advice useful?
See also
Подписывайтесь на наш канал