How to hit the ball

Learn to hit the ball is quite simple - we all know this from childhood. But how to hit the ball so that it flew strongly in a direction? Someone wrote about this entire scientific treatises, someone takes training movies, and someone tries to calculate the trajectory of the ball with the help of probability theory. Actually it all depends on the training, the more, the more precisely work blows. 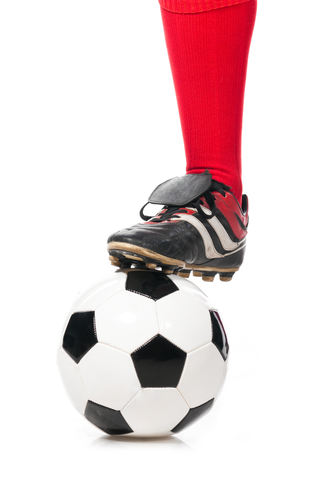 Related articles:
Instruction
1
Strikes on the ball are of two types: from the ground or from the summer. To improve the quality of impact with the ground, i.e. stationary ball, you need to keep the balance and also be aware of the correct formulation of the supporting leg and the position of kicker. From the position of the supporting leg depends on the height of impact: if it is on the same line as the ball will strike with a low trajectory, if the leg is behind the ball – the ball will fly high. In order for the force of the impact was the maximum, it is necessary to monitor the position of the knee of the kicking leg. If at the moment before touching the ball the knee is over the ball or on the same line with him, the impact force is maximum. After impact, it is desirable to continue the movement to the target, and not to stop. When the deviation of the case back, the trajectory of the ball increases, when tilted forward, the shock becomes stronger, but the ball flies lower.When you hit the ballin the air, it is also important balance all of the above, the position of the feet. However, in this case it is also important to calculate the distance to the ball. In no circumstances it is impossible to strike in the summer, if the ball is too far or too close as in these cases the shot will be blurry.
2
The beats are also divided according to application methods, i.e. according to what part of the foot strikes. So the kick toe is usually applied at the stationary ball in the bottom sector, in this case, the angle of departure of the ball is 40-50 degrees. For proper application of the shock during the run, the player is accelerated as it approaches the ball the support leg is placed behind and slightly to the side of the ball, and the batter strikes the quill movement. Body tilted forward. When applying this impact is important the right work of the hands of the opposite supporting leg hand before striking it sharply goes down, and the other is extended forward at chest level. At the moment of impact the hands are reversed.
3
Using strike the inner side of the foot usually just pass the ball. In a perfect execution of the ball needs to fly, not to jump or roll on the ground. At impact the toe of the supporting foot aimed in the direction you send the ball kicking leg bent at the knee, and the blow falls on the Central part of the ball.
4
When hitting outside of the foot, the toe of the supporting leg must be rotated approximately 30 degrees towards the target. And strike as inner with a difference only in the plane of the foot in contact with the ball.
5
Strike the rise on the one hand is the most complex, and with another – the main strike in football. Due to the large contact area of the foot with the ball in the strike achieved greater accuracy. If to strike such a blow at the stationary ball, the trajectory of its flight will be low. The supporting leg should be in line with the ball slightly to the side of it and the entire weight of the body falls on the foot. The housing is tilted so that the shoulders of the player are over the ball. Beating the leg is bent at the knee and laid back, ankle relaxed. It is important for as long as possible to keep the angle formed by the femur and tibia. The rise of tense. At the moment of impact the knee of the kicking leg is over the ball. Hand, the same pivot foot before the shot is from behind and at the moment of impact is forward and bent at the breast. After beating leg after hitting a while moving forward with the ball.The strokes of the lift are divided into two types: direct impact the rise when the ball is in contact with the rise in the middle, i.e., lace-up boots, and the impact of external or internal part of the instep when the ball falls on either side of the lacing.
6
The attacks on flying the ball by the technique do not differ from bumps rise. However, if the ball in the air to accurately calculate the moment of the swing and touch. In this case, you do not have to invest in the punch a lot of power, since precise touch will give the ball enough energy.
Useful advice
In any case, to achieve perfect accuracy and desired impact force is possible only through training.
Is the advice useful?
See also
Присоединяйтесь к нам
New advices