How to determine the directional angle

Directional angle – geodetic title direction angle of the orientation lines on the map relative to the geographic or magnetic Meridian. The angle is determined directly on the map or a magnetic azimuth. 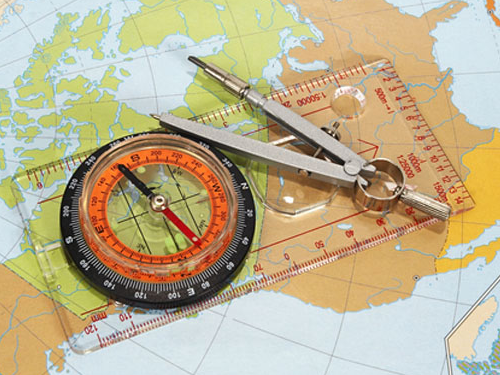 Related articles:
You will need
Instruction
1
There are several ways to determine the azimuth angle: the map or aerial view with a protractor, hormogonia or artillery round, and on a magnetic azimuth using a device with a magnetic arrow.
2
To determine the directional angle using the protractor, find the map the initial point and the object on the ground (landmark), mark them. Using pencil and ruler draw a line. The length of the line should exceed the radius of the protractor, starting from a point of intersection with the vertical line of the graticule.
3
Place the protractor on the map so that the "zero" on the protractor coincides with the vertical line and the centre – point of intersection of the lines. Count directional angle according to the scale of the protractor on the line drawn between objects. Measurement of an artillery round similar to the use of the protractor. The center of the circle coincides with the origin, and zero mark – with the North direction of the vertical grid lines, or with straight, parallel to it.
4
For measurements using hormogonia draw a line between the original point and the reference point is not less than 15 cm From the point of intersection of this line with the vertical through circulatorios make notches on the lines forming the acute angle. To do this, swipe the arc of a circle with a radius of 10 divisions of the instrument. Then put a compass with two needles at the marked points, thus making the solution of the compasses equal to the chord length (distance between points).
5
Holding both the needle of a compass is on a horizontal line, lead it to the left needle at the leftmost vertical scale of hormogonia. Continue until, until the right needle is not matched with the line of intersection, horizontal or inclined. Remove the dimension.
6
To determine the azimuth angle using a magnetic bearing use the compass or other device with a magnetic arrow, for example, the compass. In order to use this method, it is necessary to know the correction direction. This is the amount of deviation of the magnetic Meridian (magnetic needle) that point from the vertical line of the graticule. The amendment direction is usually indicated on the map in a frame.
7
Determine a magnetic azimuth, measured clockwise from the North direction of the magnetic Meridian (direction of the magnetic needle of the device) to the designated direction. Directional angle find by the formula:α = β + (±dα), where β is the magnetic azimuth, dα – the correction direction.
Is the advice useful?
See also
Присоединяйтесь к нам
New advices