How to find the blacksmith of mammon

In Lineage 2 a lot of manipulation with objects, such as adding and removing special features, withdrawal bonds, and printing chaos, making the pair of arms high grades are produced by interaction with the NPC "Blacksmith of mammon". The feature of this NPC is that every 30 minutes it randomly moves to a new location. After updating GoD to find the "Blacksmith of mammon" has become much easier. Now it appears only in the cities. 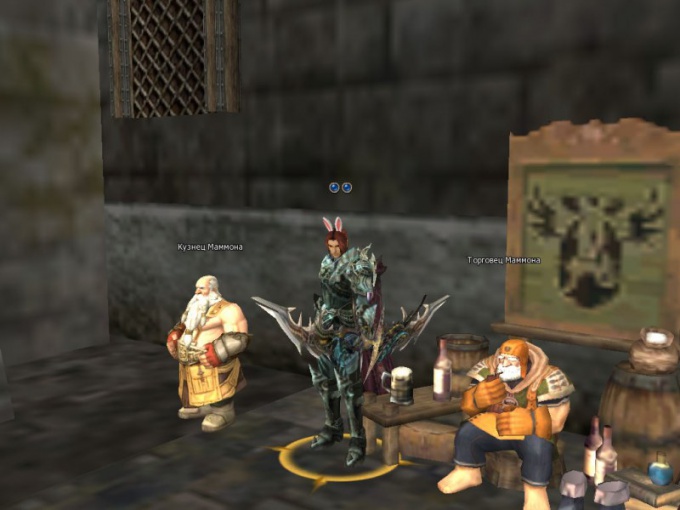 Related articles:
You will need
Instruction
1
Begin the quest "Blacksmith of mammon" in "the Village of Gludin village". Move it through a system of teleports. From the "Guardian Portal", going down the stairs, follow the West until, until you hit a wall. On the left will be "the Guild of the Dark Elves". Turn left 90°. Go along the wall until you see the NPC "the Smuggler of mammon". If there are no "Blacksmith of mammon", will continue the search.
2
Move to the city ", Gludio". From "Keeper of the Portal" climb the stairs to the "Temple of Einhasad". Go to the main entrance. Go around the building on the right side. "Blacksmith of mammon", if it is in the city, will be behind the temple.
3
Teleport to Dion. Follow to the nearest (Western) gate. Upon entering the town, turn right and go behind the nearest building. If the "Blacksmith of mammon" in the "Dion", you will see it.
4
Move to "Giran". Cross diagonally the town square. Turn into the archway that opens the passage to the North gate. Immediately behind the arch is a staircase. To her right is the place to find the required NPC.
5
Fly in "Hein". This city can be divided into five zones: one Central and four peripheral. They are all connected by bridges. Go to the North-East area, in the Northern part of it. It is the "Blacksmith of mammon" there.
6
"Hein" through "Giran" go to "Aden". Go down the stairs to the Central square. Cross it and exit North of the arch. Not down the stairs, turn right. Between the wall of the building and the curb is a narrow passage. Following him, go around the corner of the building. You will see the NPC "the Smuggler of mammon". Smith, if he is in "Aden", will be next.
7
Go to the "Hunters Village". One of the suspension bridges through the gorge in the peripheral part of the village (there are building guilds). Scroll to the "Guild of the Dark Elves". To the right of the building is the appropriate NPC.
8
Move to "Oren". From the "Guardian Portal", around the building from either side, go to the opposite part of the city (southwest corner). Check the "Blacksmith of mammon" at the narrow gap between the buildings next to the "fighters Guild".
9
Teleport to the city Runa. Being around "Guardian portal", turn South and around to the right nearest corner of the building, exit the city on the road. Head downhill towards the harbour. Almost reaching the harbour, you will see on the left a small building. With him usually there is a "Blacksmith of mammon".
10
After the "Runes" visit "Goddard" and "Aden". These cities are very similar. Their structure is almost identical, only they are focused on opposite sides of the world. "Blacksmith of mammon" appears in the leftmost part (in the direction of inspection of the temple) semiring formed by the space between the outer and inner city wall. "Goddard" is a place next to "the Guild of Dark Elves", and "Aden" next to the "Guild of Orcs".
Useful advice
Follow the chat of the characters. Often they indicate the current location and "the Blacksmith of mammon and Merchant of mammon."
Is the advice useful?
See also
Присоединяйтесь к нам
New advices