How to determine polarity of electrolytic capacitor

Electrolytic capacitor is an unusual electronic component that combines the properties of a passive element and a semiconductor device. Unlike a conventional capacitor, it is a polar element. 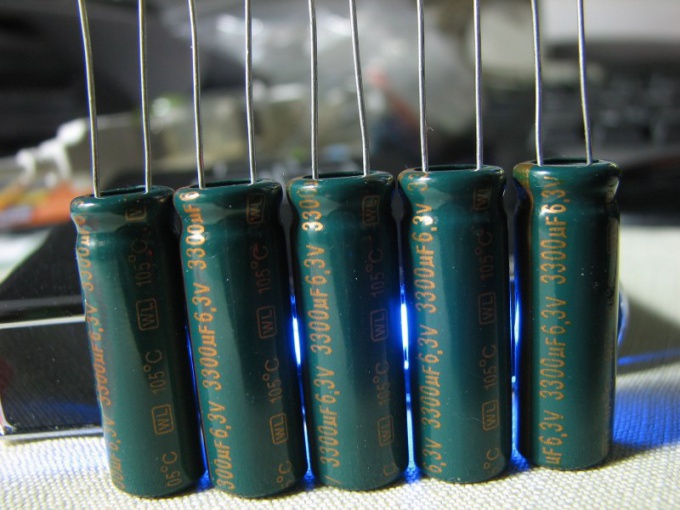 Related articles:
Instruction
1
Electrolytic capacitors have domestic production, the findings of which are arranged radially or axially, to determine the polarity of the way the plus sign located on the body. One of the conclusions is closer to where it is located, is positive. Similarly marked and some of the old capacitors in the Czech Republic.
2
Capacitors coaxial design where the housing is designed for connection to the chassis; usually designed for use in filters, the anode voltage of devices formed on the lamps. Since it is positive, negative lining them in most cases placed on the body and zero on the Central contact. But to this rule there may be exceptions, so in case of any doubt look at the unit marking (marking of plus or minus sign) or, if not, check the polarity in the manner described below.
3
A special case occurs when testing electrolytic capacitors of the type K50-16. Such a device has a plastic bottom, and marking the polarity of charge placed on it. Sometimes the signs of plus and minus buttons located in such a way that insights is passing right through their centers.
4
Capacitor legacy THAT the uninitiated may assume the diode. Usually the polarity on his body indicated in the way described in step 1. In the absence of labeling know that the conclusion is a thickening of the body, is connected to the positive electrode. In any case, do not disassemble these capacitors - they contain toxic substances!
5
The polarity of modern electrolytic capacitors are imported, regardless of their design, define a band near the negative terminal. It is applied in a color contrasting to the color of the body, and is intermittent, i.e., as it consists of minuses.
6
To determine the polarity of the capacitor are not marked, assemble the circuit consisting of a DC voltage source of several volts, a resistor of one kilo Ohm and the ammeter connected in series. Fully discharge the device, and only then turn to the circuit. After full charge read the readings. Then disconnect the capacitor from the circuit, again fully discharge turn on circuit, wait for full charge and read the new evidence. Compare them with the previous one. When connected in the correct polarity leakage is much smaller.
Note
Fully discharge the capacitor before checking and touching his conclusions. When you build or repair structures always install the device only in the correct polarity, otherwise disconnect.
Is the advice useful?
See also
Подписывайтесь на наш канал