Cat with broken tail: the exception or the norm

Various representatives of the world cat have individual length and shape of tail. Length from the sacrum to the tip can vary from 20 to 40 cm, which equals 20 to 27 vertebrae. Cats of the Persian breed have shorter tails, and Maine coons and Oriental breeds the tail is a real reason for pride. 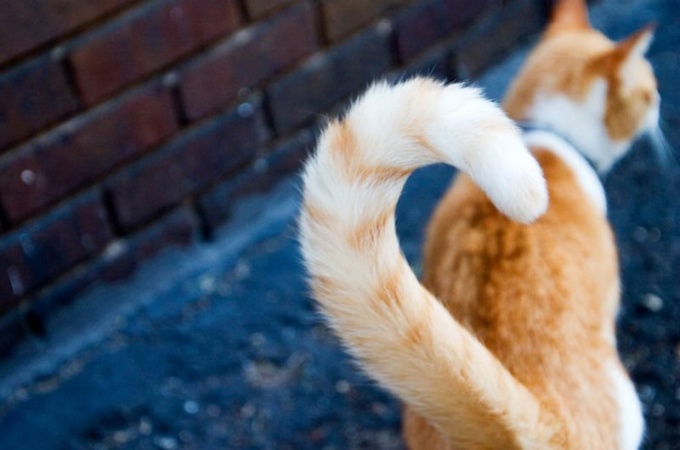 The types of deformation of the tail

Deformation of the tail can be of several types, the most common creases, kinks and bends. In the crease of the subsequent vertebrae of the tail rises above the previous the result is a "step up the stairs". Deformed vertebrae differ in size and have a rounded edge.

The opposite defect is a fracture, where the vertebrae are "a step down".

The bending is clearly visible to the naked eye, it seems that several vertebrae "jumped" over an imaginary line that runs through the middle of the vertebrae from the base to the tip of the tail. Body and muscles the vertebrae are often wedge-shaped.

Kittens with tail deformation can appear in litters as purebred and pedigreed cats. Instead of a direct tail look owners are curved to the side, broken in several places or hooked tails. Regardless of the type of deformation, such deviation permanently block access to breeding and exhibitions. Fluffy kitten can be a great pet that has preserved all the characteristics of the breed, but the animal forever falls into the category of "just for home".

Easy nekorekte of the tail, which is expressed in the last vertebra that is valid in some breeds, but breeding animals in such a situation is not recommended.

Veterinarians and breeders say that "unique" tails indicate the degeneration of the breed and are serious genetic defect. When breeding these animals you make a risk of all offspring as the next generation can not only have a curved tail, but also a serious breach of the spine. Curvature of the spine – a direct path to the innate abnormalities of the internal organs, resulting offspring would be viable.

The exact nature of these genetic abnormalities is not established, but assumptions agree on the fact that the culprit closely related to communication.

With the exception of the "blacklist" are a breed of Bobtail cats for them, warp is the norm prescribed by standard. In the animal world they are known as the Mekong or Thai Bobtail. The representatives of this breed each tail is unique and has its specific loops, kinks and bends. Not all of them are visible under the coat, but the feeling of the breed becomes clear.
Is the advice useful?
Присоединяйтесь к нам
New advices