How much weight should a baby

Weight is one of the most important indicators of children's health. Weight disorders can occur due to any disease. For example, the result of a stressful situations a child can rapidly get better or to lose weight instantly. Also, one of the risk factors is a violation of the proper and balanced diet. So experts recommend to control the body weight of your child and periodically weighed. 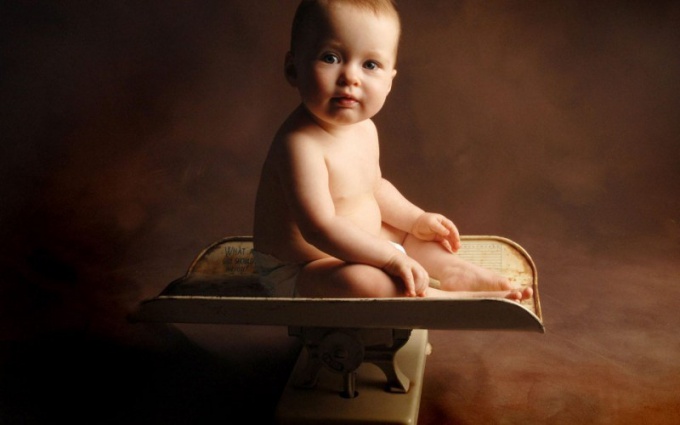 Related articles:
Instruction
1
Weight indices in boys and girls differ in many respects. In healthy girls, as a rule, the weight is somewhat less than that of boys. Even newborn boys and girls in different weight categories. Pediatricians brought the normative weight of boys and girls from birth to 10 years. The deviation from the mean of normative readings, given below, will indicate the weight imbalance to which parents should pay close attention.
2
For baby girls acceptable weight is the weight of 3200 grams. For the six-month - 7300 grams. In the year of the girl's weight should be about 8900 grams, and for eighteen months the best weight is 10000 grams.
3
Old girls weight should be about 11,500 grams, and two and a half years, he should reach 12500 grams. Moreover, parents should understand that the decrease in rate of weight gain is the norm for this period.
4
To three years weight girls need to make 13900 grams, and three and a half years should reach the level of 14,800 grams. In four years, the normative weight would be 16100 grams, in the next six months the child was added 100 grams a month, and in 5 years the balance will show 18000-18200 grams.
5
To the school the child will gain up to 22 kilograms and this weight will last until the second grade when at the age of eight will begin again stable regulatory gain of 100-150 grams a month. The nine year old girls he should be 28200 grams, and for ten-year - 31900 grams. When indicator 38 kg doctors fix obesity, everything else is within normal limits.
6
For newborn boys is considered the optimum weight of 3,400 grams, children weighing over 4 kg at birth are automatically placed at risk and are monitored by visiting nurses. In General, the larger the weight at birth is not considered a sign of health, but because large fruit always inspect more closely, appoint additional research.
7
By 6 months the baby will gain 7600 grams. One-year-old boys weighing the indicator should reach the level of 10,000 grams, and polutorogodovalogo it should be 11300 grams.
8
In two years, the scale has to show about 12600 grams, and two and a half years, 13700 grams. The three-year old boys weight should be about 14 800 grams, and in three and a half - 15600 grams.
9
In four years the rate of weight considered 16400 grams next twelve to eighteen months the baby will gain 150-200 grams a month, and have a five year old boy weight should be 18300 grams, and six-year - 20400 grams.
10
The first grade 7 years old should ideally weigh 22-23 pounds, and 8 is 25.5. For a nine year old kid the most optimal weight is 28 pounds, and at ten 31 – 32.
Is the advice useful?
See also
Подписывайтесь на наш канал