When to change timing belt

Between the shafts (camshaft and crankshaft) in the engine of the vehicle is the timing belt. With it, the movement is transmitted from one shaft to another, and the belt wears out. When it is necessary to change? 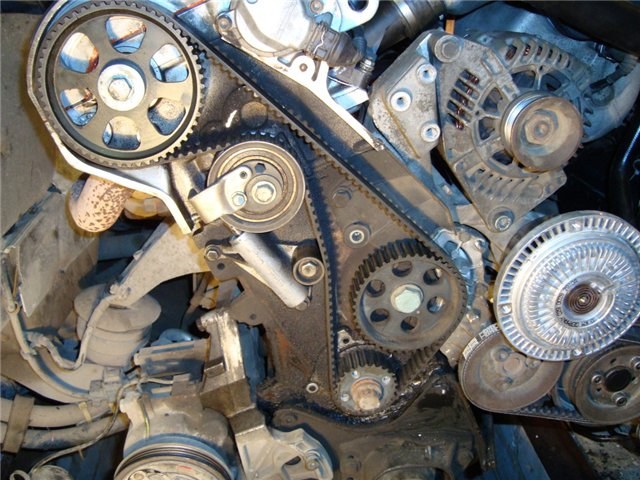 Related articles:
With timing belt driven camshafts, and he, in turn, opens and closes the valves in the correct sequence. Thus, either the working area of the injected fuel, or generated exhaust gases.

When the timing belt needs to change

The timing belt is exposed to quite powerful forces, so it wears out. How to find out what time period it be replaced? If time does not deliver the new, the old can rupture valves in the engine can be bent. This entails a fairly expensive repair that will hurt the wallet of the car owner. Though the engines in modern cars are insured from similar troubles, still have problems.

Better change the timing belt, which still have margin of safety than to repair of the engine.

The timing belt should be replaced after 40 – 50 thousand kilometers if the car of the domestic automobile industry. If the car was bought in the cabin, new, during maintenance everything you need in the garage will replace based on the warranty card. If the car of foreign production, critical for timing the mileage is much higher, about 70 thousand kilometers. Despite what manufacturers claim a certain number of kilometers necessary for replacing the timing belt, it is better that figure to divide in half for domestic cars, and subtract 40% from the stated figures are imported. So it will be more reliable and safer.

If the car is purchased with it, that is already owned, the owner should be sure to ask when the belt was changed, and did he ever. If you do not know these things, need to start from the mileage. If you exceed 30 thousand km, you just need to change this part is not to risk. The repair will result in a larger amount than replacement. If you purchase a foreign car, then again, look at the mileage. There are 50-60 thousand km? To change unambiguously.

What should be the timing belt

Do not forget the proverb, that the avaricious pays twice.

It is best to put this part in the salon, and the one plant he sets out on a new car. In the Studio around the corner can offer to save it by putting another strap, but the case is unwinnable, because it will serve up 10 thousand km And change it again. The best option is the original timing belt for a particular brand of car. The rapid failure of the timing belt due to the fact that in the conditions of Russian winters on the Parking lots have to warm up the motor at least 15 minutes, all the while the speedometer readings don't change, but the wear is in full swing. And means to save on this part should not be.
Is the advice useful?
See also
Подписывайтесь на наш канал