How is the teething in infants

Approximately six months of baby's life comes the exciting, and often troubling period: his milk teeth erupt. This physiological state causes the parents a lot of questions, because often the process the appearance of teeth is difficult. 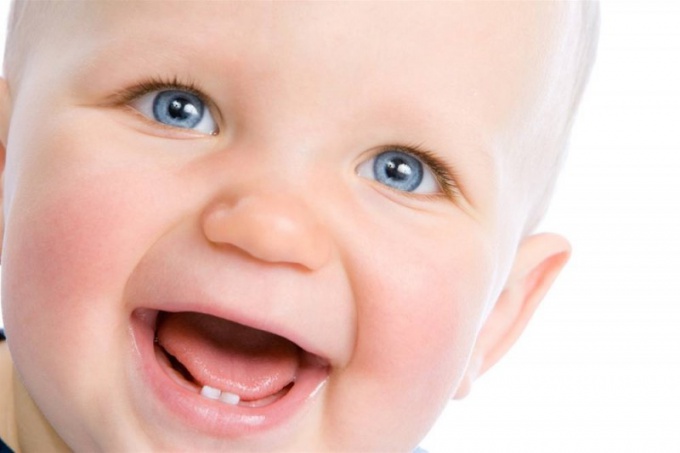 Related articles:
The first teeth in babies mostly appear in the period from five to seven months. Although in medicine there are cases when children are born with teeth. This is not surprising, because the rudiments of teeth in babies formed in the womb.

The symptoms of teething

A few weeks before the onset of such an important event in the life of not only the child but the whole family, be harbingers of incipient eruption. The different symptoms that appear in the baby, inform mom about that soon in the mouth crumbs will appear first teeth.


The first thing that most often says the mother, frequent change of mood of her child. The once calm and happy baby suddenly becomes cranky, not sleeping well, and eating. Or on the contrary, constantly "hangs" on your chest and pulls it. The baby puts in his mouth everything that comes to hand. There are children who do not stick their mouth their hands and even feet. The reason for this behavior is clear: their gums, back inside baby teeth, itchy.


One of the symptoms indicating the imminent appearance of the incisor teeth – excessive salivation. Is saliva so much that she is bubbling, dripping small rivulets down her chin.


Also doctors say that many children at this time concerned the special cold. It differs from the common cold. Nose not flow sopelki, and the liquid similar to normal water. These allocations do not cause the child discomfort.

About the imminent appearance of whitened teeth evidence gums. If you pull the lip, you can see under the gums Shine the outline of a small heart. Themselves gums can be swollen. It is as if they are inflamed. If on top of the gum is visible a white strip, then after a few days the baby will be the first cutter.

It is considered that the first erupt front lower incisors. They should appear approximately 6-9 months. Then "born" upper incisors. Behind them appear side: first top, then bottom. To a year the child can count to 8 front teeth. One and a half years begin to grow molars. After them comes the turn of fangs. Complete the epic eruption of the second molars. About three years the child should have 20 teeth.


All the deadlines are not fundamental. The kids have their own "program" appearance of the teeth. Someone first cutter can only come to year, while others by that time their mouth full. The order of emergence of teeth from each individual.

The timing of teething

As such the timing of the appearance of each tooth is not. In some cases, the entire process can take a couple of days while others can take months. Fortunately, the discomfort experienced by the child, are only first teeth. Further teething does not cause him any discomfort.

How to help your child

The baby cried less and moved the anxious days as easily as possible, you can resort to a few simple ways.
First, the child is nervous, because he always wants to scratch your gums. Give him the chance. "Comb" can serve as a teether, soother, even a crust of bread. They relieve itching and kill her baby.


Soothe the pain will help something cold on it. Wipe the gums with a cool spoon or your finger, you can reduce the pressure on the gums, thereby to alleviate the suffering of the baby. As the cooler can serve as even a wet rag. Let the kid it "rubbed".


If "household" methods do not help, you can use special gels or creams. There are tools with cooling and analgesic effect, which will calm the baby for a while. But mothers should be aware of the precautions in the use of different pain meds and not abuse them.

Despite the fact that the period of the appearance of the teeth is often not so pleasant, though, is a special time in your child's development. No fears and no emotions to catch up with the joyful feeling when you see your baby smiling at you white teeth.
Is the advice useful?
See also
Присоединяйтесь к нам
New advices