Where to start learning Georgian language

Any foreign language you can learn. Especially if the person is intimately familiar with the culture of the country it resides in and hears foreign voices. However, the teaching of Georgian to start with learning the alphabet. 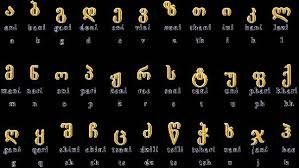 Related articles:
It is believed that a person is able to learn any foreign language, even if it is very complicated. The main thing is to approach learning and to consider some of the nuances. To learn the Georgian language, you must first memorize the alphabet. Do it best on the ABC called "Deda ena", that is, native language.
In principle, you can contact the tutor or the teacher of the Georgian language, but the Internet is ample literature on this subject, therefore learn the alphabet you can own. If it is difficult to find the Georgian alphabet, you can simply download alphabet transcription, which shows how to pronounce the letters.

Where to start learning?

As mentioned earlier, you should first learn the letters, but we must remember that the letters are not similar to Russian or Latin. As for writing and pronunciation. So first it will seem that the letters look the same, round and similar to each other. But this is not so. In addition, the Georgian alphabet has letters that are very similar to each other in pronunciation, but have completely different meanings. This is the letter "K", "CH" and "TS". If you pronounce these letters incorrectly, will change the meaning of the word, and the local Georgians are unlikely to understand its meaning.

For example, in the Georgian language is the word "Kari-door", but there is the word "Kari-wind". In the first case the letter "K" is pronounced with aspiration. Or here's another example: "Chiri-dried" and "Chiri – infection", the two differ in meaning and pronunciation of words, though only differ by one sound. In the second case, the letter "h" is pronounced firmly, but gently at first. If you understand these subtleties, to learn the Georgian alphabet and then the language will become much easier.

Therefore, even if start learning Georgian language in non-traditional way, for example, learning words or phrases, avoiding the alphabet, after some time it will become clear that further learning is impossible.

Some of the nuances of the Georgian language

Each letter in the Georgian language is written separately, no capital letters, every sentence is written in small. The letters are written directly without tilting. Moreover, there are no extra characters. The text is read as well as written, no differences.

In the Georgian language consists of 33 letters (5 vowels and 28 consonants and the rest), and if teaching 3 letters a day, learning the alphabet can be for 10 days. Then the person opens other possibilities: you'll be able to read and write in Georgian, slowly at first, but if you keep practicing, every day we get to be all better.

A lot of useful information you can find on the Internet where there are videos that show how to register the letter and how it is pronounced.
Is the advice useful?
See also
Подписывайтесь на наш канал