Brazilian footballer Ronaldo Luis Nazario de Lima most of his career stood at number 9. Classic football placement of a Central striker. His only objective is to score goals. Ronaldo was one of the last prominent representatives of this position, which has become, in recent years, a rarity in world football. 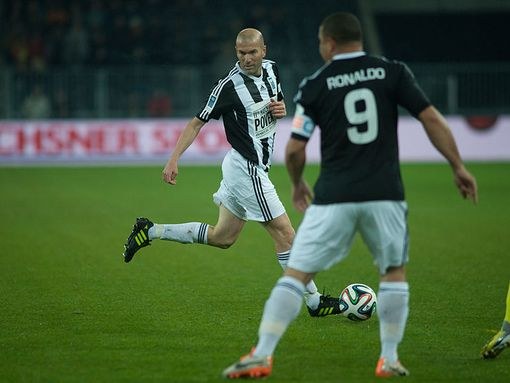 In the final of world Cup 1994 held in USA, the Brazilian team defeated in the penalty shootout of the Italian national team. Celebrating the victory, the Brazilians passed from hand to hand won the trophy. Attention attracts Romario, Dunga, goalkeeper Taffarel, other stars. Was in the team and a seventeen year old boy with a gap-toothed smile for which that victory will be only the starting point in his illustrious career.

He started his career Ronaldo in the Amateur team "são Cristóvão" from Rio de Janeiro. But in the age of 16 he signed his first professional contract with the club Cruzeiro. And was soon followed by offers from Europe. Shortly before the world Cup in the USA, Ronaldo signed a contract with the Dutch PSV Eindhoven their.

World fame came to Ronaldo while playing for Spanish club Barcelona, where he moved in 1996. In the same year Ronaldo for the first time recognized the best football player on the planet. Then it stuck for a nickname O Fenomeno. When the relationship with Barcelona has deteriorated, the player moved to the Italian "inter". Here, by the way, a short time played under his favourite ninth, and under the tenth number. With this club, Ronaldo has won the UEFA Cup for the second time in a row was named the best player in the world.

At the 1998 world Cup in France, Ronaldo came in as the main star of his team. The tournament starts successfully. The Brazilians reached the final, while Ronaldo himself, on the way to him and scored four goals. However, in the final match against the world Cup hosts as Ronaldo, because of illness, was only a shadow of itself. In the final of the French, thanks largely to the inspired play of Zinedine Zidane, defeated the Brazilians.

The disease became the first in a series of physical problems that have befallen the striker in the coming years. Soon followed by two serious knee injuries, the second of which, in the fateful match against Lazio, for a long time excommunicated Ronaldo from football.

The return of the phenomenon

After the ill-fated injury, Ronaldo has not played for almost two years. A triumphant return it to the soccer world Cup 2002 held in Japan and Korea. The Brazilian team driven by Rivaldo and Ronaldinho for the fifth time in history won the title. And Ronaldo sent in gate of contenders in eight balls. For this contribution to the victory, the third time was voted the best player of the planet.

Following five seasons Ronaldo spent in Real Madrid. Out on the field with Zinedine Zidane, Luis Figo, Raul, Roberto Carlos and other players that all-star cast. Then for a short time played for AC Milan.

Stay at the Milan club ended with another serious knee injury and return to Brazil. Many experts and fans thought that Ronaldo will not return. But he's been practicing, sparing no effort. Several major European clubs have shown interest in Ronaldo recovered. He signed a contract with Brazilian "Property", where he spent several successful seasons.
Is the advice useful?
See also
Присоединяйтесь к нам
New advices