What are the phases of the moon

The moon is a satellite of the planet Earth. Revolving around the Earth, the Moon reflects sunlight, so people think it shines. The relative positions of Earth, moon and Sun changes a little from day to day, which is why the Moon is lit by the Sun differently, these stages are called phases. 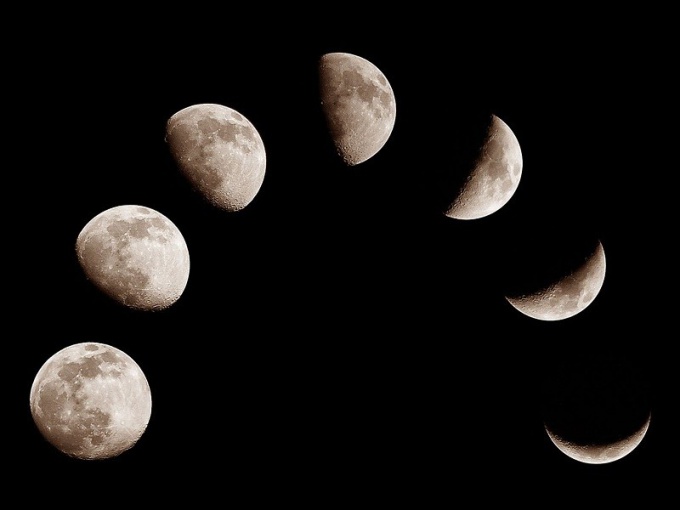 Related articles:
Instruction
1
The phases of the moon caused by movement of the so-called terminator – the word mark the border between dark and lit side of the moon. Since the moon has a spherical shape, if it is not fully illuminated, there is a month – part of a celestial body is just closed from the inhabitants of the Earth the shadow of our own planet. Even when the Sun is below the horizon, the illuminated side always shows which side it is.
2
Lunar month – the time during which the moon goes through all its phases (also called the synodic month) lasts about 28-29 days. The moon's orbit is not perfectly circular, it is an ellipse, so the exact number of days in a lunar month, time varies slightly. The average duration of the lunar month is 28.5 earth days.
3
There are the following moon phases: new moon, young moon, first quarter, rising moon, full moon, waning moon, last quarter and old moon. During the new moon, the Moon completely hidden behind the Earth, it is not visible. The night is very dark, but clearly visible all the stars. The new moon is the best time to observe in a telescope the star sky or capture it if you are addicted to something like that.
4
The young moon is the first day, when the night star only appears in the sky. You can see only a thin Crescent. This phase is quickly replaced the following: first quarter. During the first quarter of the light reaches the half of the surface of the disc. The moon is clearly visible. Then she arrives and soon shines in all its splendor: as round as a ball. Starts on a full moon. At this time see the whole Moon. Time very well in order to explore its surface to study the craters or hollows of the moon through a telescope.
5
The full moon lasts 3-4 days, after which the moon begins to wane. Soon, this state is replaced by the last quarter, you can see only half of the moon. When the moon decreases even more, it is called old. Sooner or later it disappears from the sky, comes the time of the new moon.
6
There is a mnemonic rule, which is easy to determine the moon is growing or decreasing. We need to send the stick to a non-circular side of the moon. If the sign turns out similar on "", the moon is waning, and if "p" is growing. This method is not suitable if you are near the equator, where the moon always lies on one side. But in the southern hemisphere the moon is oriented in the opposite direction: if for a given rule, you determine that it grows, that means actually decreases.
Note
Usually a month is one moon, but if the two of them, the second is popularly called the "blue moon".
Is the advice useful?
See also
Присоединяйтесь к нам
New advices