How to check the injectors VAZ 2110

The loss of engine power, deterioration of other performance can be caused by a variety of reasons, including contamination of the injector plays a role. But to know for sure, need to check the fuel system components. 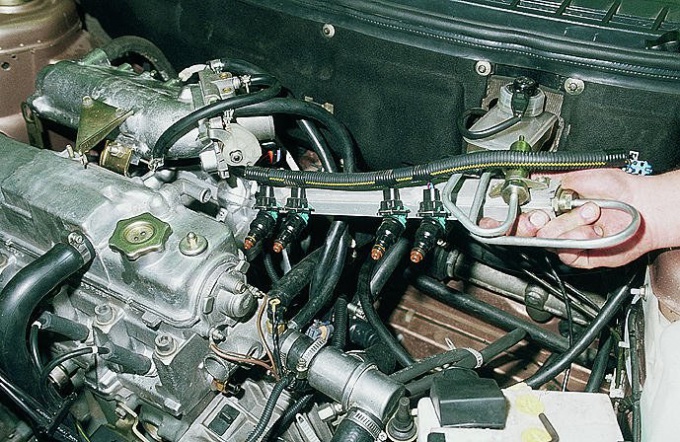 Related articles:
The consequences of contamination of the nozzles can be expressed in increased fuel consumption, power failures at the sharp pressing on the gas pedal, the instability of engine operation at idle. Another indirect sign is increased frequency of rotation of the crankshaft at idle and hard starting. All of the above shortcomings indicate that there is a sense inspect the injectors. This can be done directly on the engine.

Disconnect the negative terminal from the battery; for the convenience of further work will have to remove the air filter. To do this, the bottom with a screwdriver (or your finger) press the plastic latch and disconnect wire connector from the mass air flow sensor.

Next, loosen the clamp, located on the tube connecting the filter housing and intake pipe. From the crossmember of the radiator frame on the bottom with your fingers, squeeze a pair of rubber supports under the filter. You can now lift the front of the filter to squeeze out of the hole the rear bearing and remove the entire housing.

Check the injectors on ВАЗ2110

Now you need to screw the bolts securing the rail and the screws that secure the holder to the fuel tubes. Then gently slide to the side rail and pull it with the injectors. Pre-prepare a small transparent container (for example, trim the plastic bottles) that need to be hung directly on the rail, one under each nozzle. A further stage of checking the quality of fuel atomization. Connect the negative terminal on the battery and have an assistant spin the starter.

Watch the process of spraying: should be a right cone, the volume of fuel in all 4 tanks should be the same. If any atomizer does not meet these conditions, it must be replaced. When ignition off, inspect the nozzle: the flow of fuel to the dispensers also have defective parts. One of the reasons of failure – violation of the integrity of the winding. To check this, use the ohmmeter. The meter should show a resistance of 11-15 Ohms. If not, the part needs to be replaced.
Is the advice useful?
See also
Присоединяйтесь к нам
New advices