How to cook chicken broth

Nourishing chicken soup has unique healing properties. It is ideal for recuperation of sick people in the healing process and perfectly improves the condition of the body weakened from colds. To cook really healthy and delicious soup of chicken, you should know some little tricks. 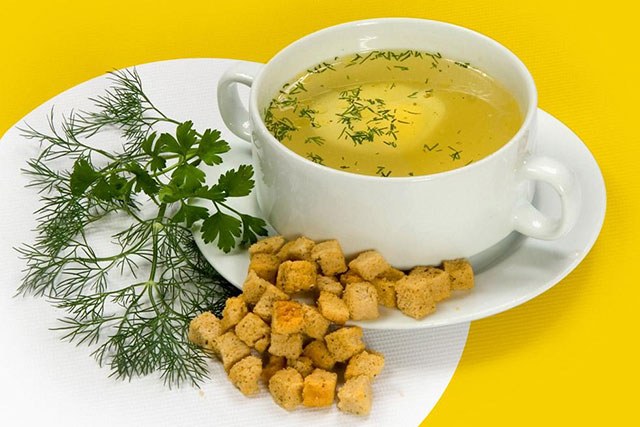 In the composition of the broth contains cysteine - an amino acid that causes the liquefaction of sputum, and effectively contributing to the improvement of the human condition, suffering from diseases of the bronchi and lungs. The broth also contains iron and magnesium, copper and calcium, selenium and vitamin B. They help improve the functioning of the Central nervous system and normalize metabolism, thereby increasing the resistance of the human organism to adverse factors.

The easiest way to prepare the broth from a whole chicken, and it was more nourishing, fragrant and delicious, it is best to shifted the bird into several pieces. Usually it is cut into four parts. Prepared and thoroughly washed under running water the meat is put into a clean pot and filled with cold water so that it for a couple of inches covered the chicken pieces on top.

Once the water in the pot is boiling, reduce the flame and gently remove with a spoon the entire formed on the surface of the water foam. Doing this is easiest with a slotted spoon. The foam should be promptly and completely removed throughout the cooking time, or the soup will lose its transparency.

After the foam will become very small, into the pot, you have to put a large peeled onion, parsley root and chopped large carrot slices. After twenty minutes of cooking the vegetables in the broth will be to put spices to taste. You can use allspice or black peppercorns, rosemary or Bay leaf, saffron or cloves. It is important to make sure they were not too much, otherwise the seasoning will just kill the taste and unique flavor of chicken broth.

Once you add to the pot with all the necessary vegetables and spices, you will just have to salt the water and cook the dish to simmer for another forty minutes. Ready chicken soup is clear and rich, and on its surface float beautiful slices of chicken fat, with a nice amber-yellow color. Serve the broth in a separate dish, or use as the base for other dishes.

When applying in each plate put a piece of boiled chicken meat, half-boiled eggs, finely chopped parsley or dill. Also on the table you can put sour cream, which perfectly complement the taste is fragrant and rich broth.
Is the advice useful?
See also
Подписывайтесь на наш канал