The icon of "Indestructible wall" - guardian

An icon is not just a graphic image of a Saint. It is a sacred object, performed much sense from the point of view of a Christian. Icons is associated with many legends, in which I want to believe – say that they appear miraculously, that near they healed the sick, and sinners learned the joy of repentance. 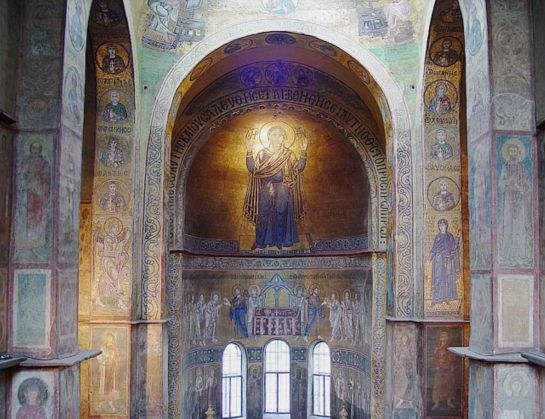 Related articles:
One of the most revered and beloved Holy people in Russia always was the mother of God, so Marian icons the most many and they are varied: the Kazan icon of the Fedorovskaya icon of the Vladimir, unexpected joy, Emachine evil hearts... one of those icons is called "Indestructible wall".

The peculiarity of this icon is that the mother of God is depicted here without the baby. Here in her way emphasizes not so much motherly, how much the intercession of the Holy virgin, which she promises to Christians. The virgin on this icon stands tall on the Golden quadrangular stone with his hands, as if praying for all Christians. This image called the virgin Orans (from the Latin orans – "praying").

Founded during the reign of Prince Yaroslav the Wise, Saint Sophia Cathedral in Kiev during the eight centuries of its existence, could not remain unscathed. Its various parts have repeatedly been destroyed, they were restored – but this does not apply to the Central apse, where the mosaic image of the virgin. This guarantee is already possible to have a miracle! This is why the image and received the epithet "Indestructible wall" and became known as miraculous. In Kiev believe that the city will not die until there is an icon.

This name Association with the excerpt from the song 9 of the Canon of prayer to the virgin Mary: "Refuge and intercession have recourse to You Budy, Devo, and indestructible wall, a refuge and cover and joy".

The veneration of icons and miracles

The icon of the virgin Mary "Unbreakable wall" is dedicated to special prayers, the troparia and the akathist. A celebration in her honor, the Orthodox Christians celebrate on 13 June (31 may, old style).

Through the prayers before this icon is not just a place of healing, there were missing people, restore the marital relationship in families where the case was going to divorce.

One of the wonders of lifestyle-related, occurred in the early 20th century in Spaso-Eleazarov monastery (Pskov oblast). Man Gabriel saw in a dream a beautiful city, which led to the wide road which a lot of people went to the city, but the terrible giant seized them with his network. Side was situated the other way – a narrow, steep path. Few travelers chose it, they also tried to catch the giant, but the network has hit the wall, protects people. And then the elder had remembered the words from the akathist dedicated to the icon of "Indestructible wall": "Hail the Kingdom Indestructible Steno...", he realized that the wonderful wall was erected by the Queen of Heaven.

Turning in prayer to the saints, people often expect protection from earthly adversity. But the main thing that needs to fear a Christian is a sin, a temptation that may hinder a person to achieve Union with God, from this it is necessary to seek protection from the virgin and other saints. This is the deep meaning of the vision of the old man, and must remember that any Christian who prays before the icon of virgin Mary "Unbreakable wall".
Is the advice useful?
See also
Присоединяйтесь к нам
New advices