How to get to the Pokrovsky monastery

Pokrovsky Stavropigialny women's monastery is located in Moscow, street Tagansky, d. 58. You can reach it first at the subway station Marxist, then either walk or use ground transport. 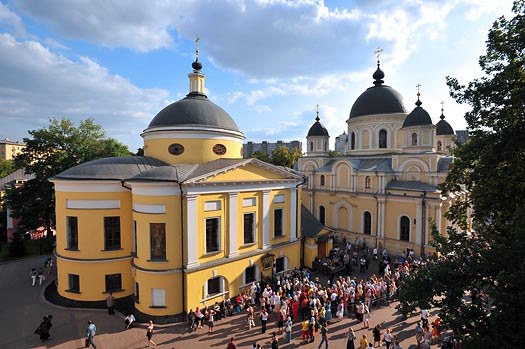 Related articles:
Instruction
1
The full name of the Pokrovsky monastery in Moscow – Pokrovsky Stavropigialny women's monastery. It was founded by Tsar Mikhail Fedorovich in 1635, called Bozhedomskoe and existed at first as a monastery. In subsequent years it was repeatedly rebuilt. In the 1920-ies the monastery was closed, the bell tower was blown up, part of the monastery grounds was a Park. In 1994 the monastery was returned to the Church.
2
Every day the walls of the Pokrovsky monastery the queue. The faithful go to venerate the relics of Matrona of Moscow, to ask for Holy help and healing.
3
Matrona Dimitrievna Nikonova, born in 1885 in a peasant family. From birth she was blind but had the gift of foresight and the ability to heal people. Most of the life she lived in Moscow, where he died in 1952. Her tomb on the Danilovsky cemetery became a place of pilgrimage. In 1998 took place the transfer of the relics in the convent of the intercession. Soon Matrona of Moscow was canonized by the Russian Orthodox Church.
4
To get to the Pokrovsky monastery, take the metro. Get off at the station Marxist. It's on the yellow Kalininskaya line. Once on the street Taganskaya, will have to walk 10-12 minutes, until red brick walls of the monastery. At the entrance to the Church, where the relics of Matrona of Moscow, usually there is a queue.
5
If it is difficult to walk, you can go by trolleybus (№№16, 26, 63) or by bus " No. 51, 74). Get off at the stop "Bolshaya andronevskaya street". Pokrovsky monastery is very close.
Note
Monday to Saturday Pokrovsky monastery works from 7-00 to 20-00. Sunday from 6-00 to 20-00. After eight o'clock in the evening none of the visitors can stay at the monastery.
Useful advice
Usually people go to the monastery with flowers, which give to the servant in the Church. Flowers bring the reliquary with the relics of St. Matrona of Moscow and sanctify them. When you exit you can take one of the consecrated buds with him.
Is the advice useful?
See also
Присоединяйтесь к нам
New advices