Why you need a dream catcher

Since time immemorial people believed in the power of various amulets and amulets. Currently they are still used to protect home, family, business, etc. from various negative influences. Among such protective equipment includes so-called Dreamcatcher is a talisman, guarding the sleep of his master. 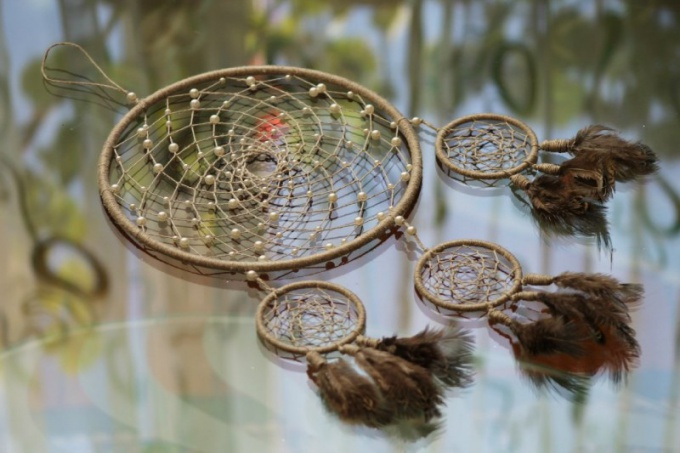 According to legend, came from the Indian tribes, the dream catcher protects people from evil spirits and nightmares during the night. This amulet is a web, woven from the threads original – from deer lived, and stretched on a wooden or plastic wrap. As decorative elements that adorn the Dreamcatcher, using bird feathers and various beads, beads, etc. the Amulet is hanging over the head of a sleeping person is considered to be in its cobwebs stuck all the bad dreams, the nightmares, coming from the outside, and the good dreams pass freely.

An old legend about the history of Dreamcatcher

There are various legends that describe the history of the dream catcher. Thus, according to one of them, the elder of the ancient Indian people, the Lakota was on mount sage in the guise of a spider. He began to tell the Indians about the nature of human existence, that man, being born and dying, closes the circle of his earthly existence. The spider bent willow twig, giving it the shape of a circle, and began to connect it to the contours of thin rows of elegant wide web.

In the words of the wise spider in every person's life there are many roads both right and wrong. The web is a perfect circle in the center of which there is a hole. All the good that happens to a man, will pass through the center, and evil is entangled in the web and disappear at sunrise.

According to legend, it was after this meeting first the Indians and later other peoples began to produce improvised dream catchers and hang them over the cradles of their children, to protect kids from the bad things.

The use of a catcher currently

This mascot has become famous in the 60-70-ies of the last century on the wave propagation of various mystical movements and currents. Now it can be found in stores throughout Europe in the various designs, the most expensive models do, even with the use of precious stones.

In the Internet there are many master classes, teaching everyone the simple manufacture of this fantastic talisman. If you have any desire to make this amulet with your own hands, you'll need very little materials and time, but in the result you will get a real talisman, charged with your personal energy. It is possible to give to friends interested in spirituality and mysticism, or to leave your own home to protect you and your loved ones during sleep.
Is the advice useful?
See also
Присоединяйтесь к нам
New advices