How to have a good time in Yalta

Feel fabulous hero, enjoy the wonderful climate, amazing views, numerous monuments of architecture, to learn about the healing power of nature can be just once in the Crimea, in the beautiful city of Yalta. 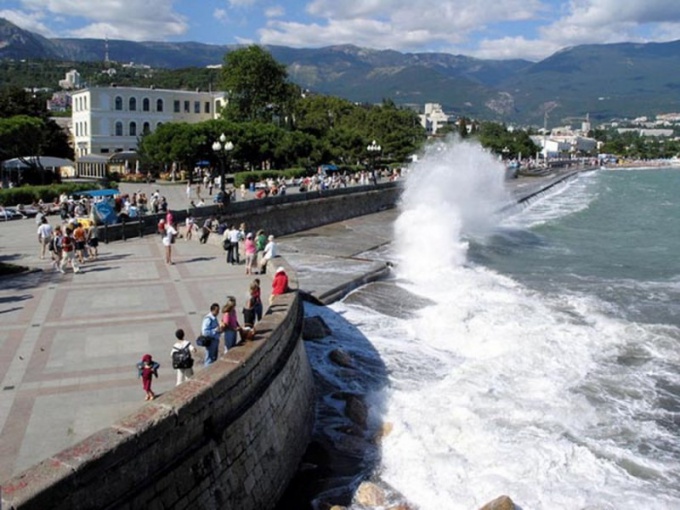 Yalta - the magnificent pearl of the black sea coast, surrounded by mountains, which annually welcomes hundreds of thousands tourists for its hospitable arms, offering unforgettable holiday and entertainment for children and adults. However, honestly, relax on the beach as it was, and remains a priority. And this is no accident. All kinds of boats, boats, water skis, a huge number of beach bars all contribute to the serene pastime to the soothing sound of the surf.

Warm pebbles or Massandrovskogo Nikitsky beach, clear water and untouched natural beauty of Cape Marian, aerosolyary and even walking on the gliders will make the days spent in Yalta truly unforgettable.

Have a good time in Yalta will help pre-organization. Before the trip, discuss who the members of the family what they want to do, what to see, where to go. This will help to avoid disputes.

Yalta offers a worthy excursion, replete with magnificent palaces of the Russian nobility, such as Levandoski, Vorontsov, Mazankowski, Yusupov. To see the most famous Crimean waterfall with the exotic name of Wuchang-Pop, not to go to the Chekhov house - so do not know the real Yalta.

Nature lovers should visit the famous Nikitsky Botanical garden, striking the imagination of the viewer abundance of fauna brought here from around the world. By cable car you can climb to the top of the Darsan hill where personally enjoy the scenery of this fertile land, if this is not enough - it's worth the risk and climb into the clouds on a real cable car. Or, on the contrary, will go down into the depths of the caves, which are abundant in Yalta.

How about Swallow's nest, exotic, fortress, designed in the Gothic style, situated on the edge of a cliff - that's a truly amazing spectacle, which is simply inexcusable to miss if you were in Yalta. Evening entertainment with plenty of bright ideas excites the imagination of an inexperienced tourist.

Reflective fountains, colorful show with participation of famous actors and singers - all that is available to tourists and residents daily.

Break the stereotypes, come to Yalta in the winter, along with a great Christmas program you will be able to enjoy the wonderful ski slopes at the same time so dear and unfamiliar nature. Snow-covered forest, the serene calm of the snow-covered hills, the regularity and the slowness is able to return the lost strength and balance.
Is the advice useful?
See also
Присоединяйтесь к нам
New advices