Dombai is the name of the mountain areas, the mountains and the village at its foot. Dombay is located in the North Caucasus, in the Republic of Karachay-Cherkessia in the area of the Teberda river. It is a vast meadow formed at the intersection of three mountain rivers, one of which is a tributary of Teberda. 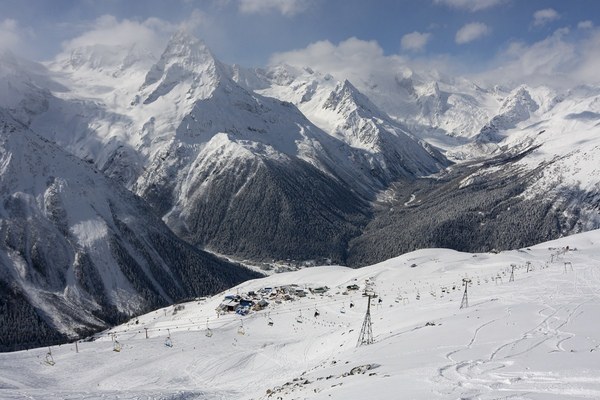 The mountain area of Dombay

Mountain area, Dombai also known as the Dombai glade. It is located in the Caucasus mountains, specifically in the region of the North Caucasus, which lies on the southern border of Russia. The North Caucasus includes the Caucasus – flat territory to the North of the mountains between the sea of Azov, the Kerch Strait and Caspian sea and the Northern part of the Great Caucasus range, except for the Eastern ranges, which belong to Azerbaijan. The great Caucasus mountain range stretches between the Black and Caspian seas for more than a thousand kilometers. The territory of the North Caucasus is divided between several Russian constituent entities: the Krasnodar and Stavropol edges, Adygea, Kabardino-Balkaria, Dagestan, Karachay-Cherkessia, and others.

Dombai is located in Karachaevo-Cherkesskaya Republic, which is located in the North-Western part of the ridge. From the South the territory of the Dombai glade is limited to the lesser Caucasus mountains, otherwise clear boundaries of the clearing does not exist, because it is not an administrative unit. Dombay is called the area in which connected three major gorge – Dombai-Elgin, Amanauz and Alibek. They form a vast meadow that lay between the Caucasus mountains at an altitude of about 1600 meters above sea level.

The name "Dombai", according to one version, is translated from Karachai language as "the bison" – these animals had lived in the forests of the North Caucasus in large numbers.

Dombai glade is included in the composition of the Teberdinsky nature reserve, hence the starting point for many sightseeing tours to the main natural monuments protected areas of the North Caucasus.

Among the attractions of the Dabie – Concourse waterfall, the peak of Ine, cliffs, Striped mountains, the turye lake and the Alibek glacier.

The mountain and the village of Dombay

The highest point of the Dombai glade is mount Dombai-Elgin, also known as just Dombay. It towers over the terrain to the height of 4046 meters and has two peaks lower – 4036 and 3950 meters. To the West of the mountains is a small urban village of the same name – Dombai. It is located at the confluence of Alibek and Dombay-Elgin in the source of the Teberda river Amanauz. This village is one of the most popular ski resorts in the country, a well-known centre of winter sports with a developed tourist infrastructure. The village also has several dozen hotels, numerous cafes and restaurants Caucasian cuisine, five cable cars that lift wanting to a height of three thousand meters above sea level. From this height a good view of the entire Dombai glade is decorated with mountain ranges with Dombay-Elgin headed.
Is the advice useful?
Подписывайтесь на наш канал