Who is bordered Russia

Russia – the largest area of the country. In addition the Russian Federation has the greatest length of land and Maritime borders. Russia has a common border with 16 (according to UN 14) countries. 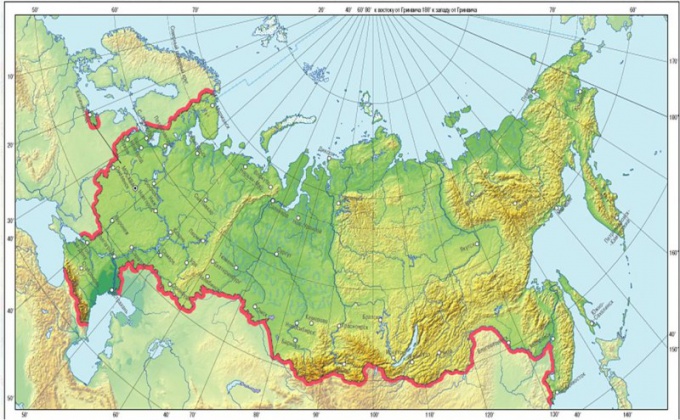 Russia has common borders with several countries of Europe. 196 km of borders available in Russia (Murmansk oblast) and Norway. The length of the border of Russia (Murmansk, Karelia, Leningrad region) and Finland is 1340 km Border line 294 km is shared by Estonia and the Leningrad and Pskov region of Russia. The Russian-Latvian border is 217 km and separates the Pskov oblast from the territory of the European Union. Kaliningrad oblast, which is somewhat isolated, has 280 km of the border with Lithuania and 232 km with Poland.

The total length of Russia's borders is, according to the border service – 60 900 km.


The Western and South-Western border.

Russia has 959 km common border with the Republic of Belarus. 1974 km land and sea 321 km common border Russia has with Ukraine. It shares borders with Belarus, the Pskov, Smolensk and Bryansk region, and Ukraine – Bryansk, Belgorod, Voronezh and Rostov region. In the area of the Caucasus mountains, Russia has 255 km of the border with Abkhazia, 365 km with Georgia, 70 km South Ossetia (or 690 km border with Georgia, according to the UN), and 390 km border line with Azerbaijan. Abkhazia borders the Krasnodar Krai and Karachay-Cherkessia, Georgia, Karachay-Cherkessia, Kabardino-Balkaria, North Ossetia, Ingushetia, Chechnya and Dagestan. South Ossetia borders North Ossetia. Azerbaijan borders on the Dagestan Republic.

Part of the border territories of Russia are trying to challenge Estonia, Latvia, the Republic of China (Taiwan) and Japan.


South of the border.