Norilsk is a city in the Arctic circle, near the river Yenisei. Norilsk is isolated from all the major cities of Russia and the nearest port city of Dudinka distance is about 90 kilometers. 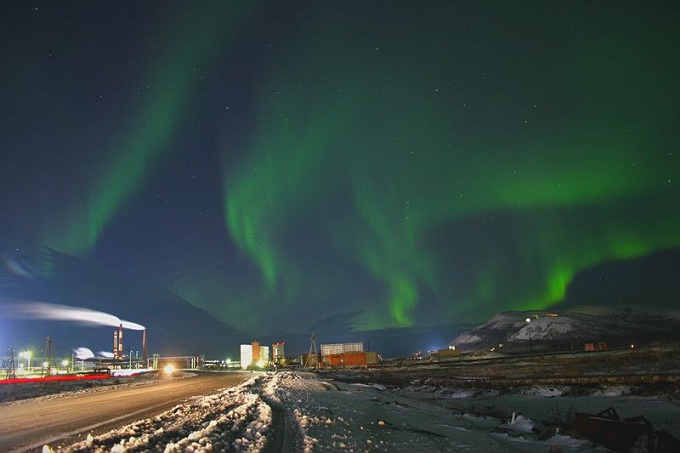 Related articles:
Norilsk is located on the Northern boundary of the Krasnoyarsk region, 90 km from the Yenisei river. Just North of Norilsk Taimyr Peninsula, where, because of the severity of the climate and lack of transport infrastructure there are no permanent settlements. Despite the severe conditions of life in Norilsk is still home to 117 000 people and the population of the city is constantly increasing, albeit at a slow pace.

The majority of residents are immigrants from other regions of Russia, settled here, only at the turn of the 20th and 21st centuries. Also in a high proportion of shift workers. Despite all of the complexity of development of regions of the far North, Norilsk is quite a modern developed city and is the centre largest in Russia in the Norilsk industrial region.

In Norilsk is very difficult civil engineering, so many projects have to develop specially for this city. Most of the buildings are on piles deeply driven into the ground of permafrost.

Where is Norilsk and how to get there

Once in Norilsk operated unconnected with the main network of the Russian railway, but in the 90-ies of the Norilsk railway stopped service passenger trains and electrified sections of the railway tracks was dismantled. Train station of Norilsk ceased to exist in 1999. Today the only way to get to major cities in Siberia and European Russia is by air.

Norilsk airport is located on the West of the city is approximately 52 km and you can reach it by bus or taxi from the bus station. Flights Norilsk associated with Moscow, Novosibirsk, Krasnoyarsk, Belgorod, Dixon, Saint-Petersburg, Samara, Yekaterinburg, Baku, and Rostov-on-don and other cities. Travel time by plane from Norilsk to Moscow will be approximately 4 hours 35 minutes.

In this Northern city is the world's largest plant for the processing of Nickel ores of Norilsk Nickel, which provides local residents with basic jobs, and mercilessly exploits the resources and ecology of the region.

Located in the Norilsk enterprises account for about 60% of all revenues in the budget of Krasnoyarsk region, and the level just explored natural resources in the vicinity of the city exceed a trillion rubles.

Norilsk the most polluted city in the world and the most polluted city in Russia. As a consequence, life expectancy is ten years less than in the regions of the European part of Russia. Cancer are found among residents of Norilsk often twice. In addition, Norilsk is a very long winter, which lasts from September to may.
Is the advice useful?
See also
Подписывайтесь на наш канал