Panangin: instructions for use

Panangin medication prescribed for heart disease, headaches, diskah, disorders of the kidneys, heart, irritability, fatigue, and even deterioration of the General condition. 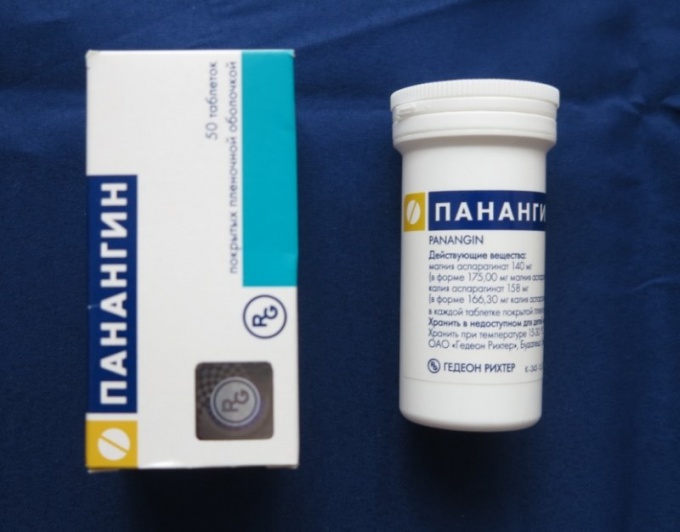 Related articles:
With a deficiency or overabundance in the body of potassium and magnesium in humans can cause serious disorders of the cardiovascular system, brain, kidneys. Also frequent arrhythmias, fatigue, swelling of legs, face. With all these ailments helps this drug like Panangin, which is a real vitamin for the heart.

A General description of the drug

Panangin (or asparkam) is a combined preparation. Available in tablets, in the form of a disc, usually white, or almost white, film-coated with a glossy or slightly rough surface. Virtually odorless. Also available as solution for injection

Panangin helps to normalize the level of potassium and magnesium in the cells of the tissues. Potassium and magnesium ions have an effect on the contractile action of cardiac muscle and thereby reduce the risk of oxygen starvation (hypoxia). The result prevented the development of cardiac arrhythmia, as well as improves the function of the gastrointestinal tract, and contraction of skeletal muscle.

Drug Panangin assigned as adjuvant therapy in heart failure, cardiac arrhythmia caused by hypokalemia, which is possible with the intoxication cardiac glycosides such as digoxin, digitoxin, gitoxin, laniazid, caldigit and regime, as well as when taking prednisone, hydrocortisone and some diuretics. It is recommended the use of Panangin after infarction conditions, for abnormal heart rhythm commonly associated with ventricular arrhythmias. Panangin useful in the treatment and prevention of coronary heart disease, myocardial infarction, cardiac arrhythmias in the complex treatment of the glucosides with simultaneous use of urinary remedies, disorders of metabolism. Prescribed drug after severe infectious diseases, accompanied by large losses of fluid. Useful Panangin blood transfusion, when lack of food depleted in ions of magnesium and potassium.

Panangin solution for injection can only be entered intravenously, intramuscular use injections can cause irritation to the tissue.

Prescribe this drug and children. For example, in infancy, it is recommended to strengthen the heart muscle newborns, with open heart, to relieve seizures.

Newborns sometimes after a heavy crying or at an elevated temperature, there may be convulsions. These symptoms usually occurs when deficiency of potassium and magnesium.

And then, in this case there is a need in the purpose of Panangin, which is well tolerated by children.

Panangin quite often given to pregnant women. With it during pregnancy can be combated with the swelling, toxicosis. The positive effect of Panangin has on the heart muscle and kidneys women. He also contributes to the proper development of the fetus, in particular, the formation of the brain and muscular apparatus.

Method of application and doses

Panangin administered orally or intravenously. When it comes to tablets, adults of their appoint 1-2 pieces 2-3 times a day for 14 days. If necessary, the prescription dose can be increased to three tablets at one time to three times a day. Then gradually reduce the dose.

For arrhythmia solution of Panangin are administered only intravenously, drip 1-2 ampoules, disposable. If necessary, the procedure can be repeated after 4-6 hours.

When used correctly and compliance with the dose side effects of Panangin not revealed. In rare cases, patients with inflammation of the stomach, low acidity, cholecystitis may be a burning sensation, discomfort in the stomach. The reception panangina can experience a decrease in blood pressure, nausea, vomiting, diarrhea, reddening of skin, feeling of heat. When taking high doses may increased number of bowel movements.

The use of Panangin contraindicated in cases of hypersensitivity to one or more components of the drug, acute or chronic renal failure, Addison disease, cardiogenic shock. It is not recommended to combine the drug with alcohol and drugs. And in some cases the use of Panangin on the background of pronounced intoxication can be dangerous.

The effect of the drug on the ability of the transport

During the study of the drug revealed no negative impact on the ability to drive or operate complex, requiring special attention mechanisms.

Panangin may cause to reduce the process vsasyvanija tetracycline, sodium fluoride, iron salts, so the reception panangina you must assign 3 hours later after taking the above drugs. With simultaneous use of Panangin increases the risk of potassium-sparing diuretics may cause arrhythmia and asystole.

The conditions and method of storage. Leave the pharmacy

Panangin should be stored in a dry, dark place at a temperature of from 15 to 30 degrees.
Shelf life tablets: 3 years ampoules with solution for injections in 2 years.