The drug "Lozap" - one of the drugs that help people with hypertension to successfully maintain normal blood pressure levels. 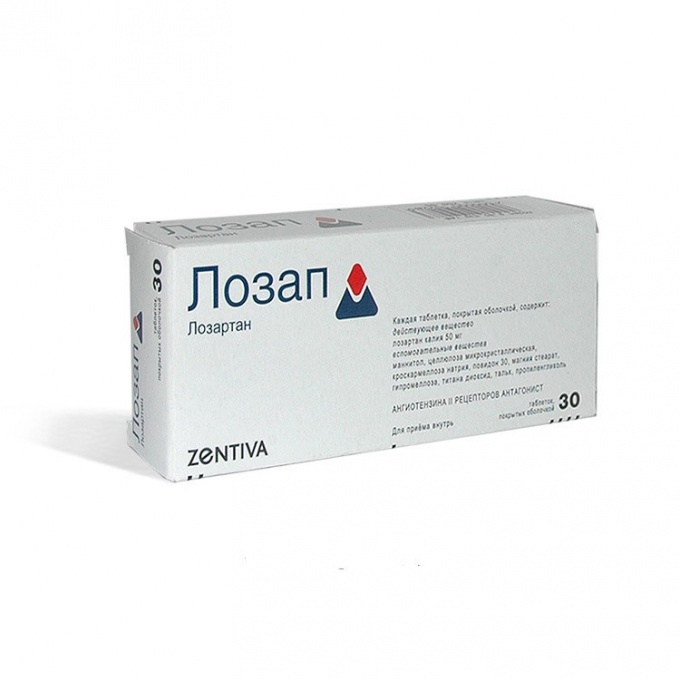 The description of the drug

Drug "Lozap" (Lozap) is available in coated tablets, different dosages from 12.5 mn (No. 90), 50 mg (No. 50, No. 30). Also belongs to this group and drugs "Lozap plus". From "Lozada," it is different composition. So, in "Lotape" active substance only one thing – losartan potassium and "Lozap plus" - two: losartan potassium and hydrochlorothiazide. As additional substances and the drug used are mannitol, microcrystalline cellulose, croscarmellose sodium, magnesium stearate, povidone, macrogol, Dimethicone, hypromellose, talc, yellow dye.

"Lozap"" is a antihypertensive agent that blocks the receptor subtype AT1 and provides an obstacle to the binding of angiotensin 2 AT1 receptors, the Drug has no effect on the kinin system is not conducive to the accumulation of bradykinin. Lozap is a prodrug. Its active metabolite (carboxylic acid), which is formed in the biotransformation process, having antihypertensive effect. After oral administration within one hour "Lozap" reaches the maximum level in the blood plasma, its metabolite maksimalnoi concentration is reached within 3-4 hours. Withdrawal of the drug for nine hours. In the first two hours excreted losartan and its active metabolite, during 9 hours. As was revealed in the course of medical research, the hypotensive effect is achieved faster in combination of losartan and hydrochlorothiazide. Therefore most effectively to a given problem to cope combined preparation "Lozap plus".

A single dose of "Losap" having antihypertensive effect for 6 hours, then gradually during the day the effect will be reduced. So use "Lozap" you need to constantly. With regular medication on the second or fourth week the patient will feel full antihypertensive effect of the drug. Blood pressure will stay normal. It should be noted that the reduction in blood pressure is observed equally in males and females. Racial disparities in antihypertensive process identified during the studies to achieve a positive result did not show itself. "Lozap" all acts equally.

Lozap prescribed to patients suffering from arterial hypertension, combined therapy - patients with chronic heart failure and in case of intolerance or therapy reepectively when using ACE inhibitors. It is recommended this drug for the prevention of cardiovascular disease, including stroke and mortality in people with high blood pressure and left ventricular hypertrophy. Diabetic nephropathy in patients with diabetes mellitus accompanied by arterial hypertension is also treated with the help of "Losap".

Method of application and doses

When hypertension "Lozap" appointed once a day in dose of 50 mg. If effect is not achieved, the dosage should be doubled: 100 mg once daily or 50 mg 2 times a day.

The treatment of chronic heart failure should be started with 12.5 mg a day, once. Within weeks the dosage is gradually increased first to 25 mg and then to 50 mg. this must monitor the condition of the patient, his drug tolerance.

Patients receiving high dose diuretics, the initial dose of the drug prescribed 25 mg. Gradually the dose can be increased. For the elderly and patients with renal insufficiency, the dose is not adjusted. Dose reduction is necessary for people with impaired liver function.

"Lozap" is one (or 2 times a day), without chewing the pill and drinking plenty of water. To take the medicine at any time, regardless of the meal.

"Lozap" is not recommended in case of intolerance to one or more components of the drug, as well as during pregnancy. Contraindicated "Lozap" in childhood.

Excessive consumption of the drug may experience a reduction in blood pressure, tachycardia, sometimes bradycardia. To eliminate these symptoms it is recommended that therapy aimed at the excretion of the products of the drug.

Interaction with other drugs

While receiving "Losap", "Rifampicin" or "Fluconazole" the level in plasma active metabolite may be reduced. In the use of the drug with potassium-sparing diuretics, potassium products required to control the level of potassium. Reduce hypotensive effect "Losap" drugs such as "Indomethacin" and other NSAIDs. It did not reveal the decrease in the effect of the simultaneous administration of digoxin, phenobarbital, warfarin, erythromycin, and cimetidine.

Keep the preparation in a dry dark place at temperature not exceeding 30oC.

Not recommended the use of the drug to people suffering from liver diseases. If you want to use the drug to reduce the dose and monitor the patient's condition.

The drug can cause drowsiness, confusion and affect control of the vehicle and complex mechanisms, therefore it is not recommended to appoint people whose profession is connected with increased attention.

During drug use of alcohol is strictly prohibited.
Is the advice useful?
Присоединяйтесь к нам
New advices